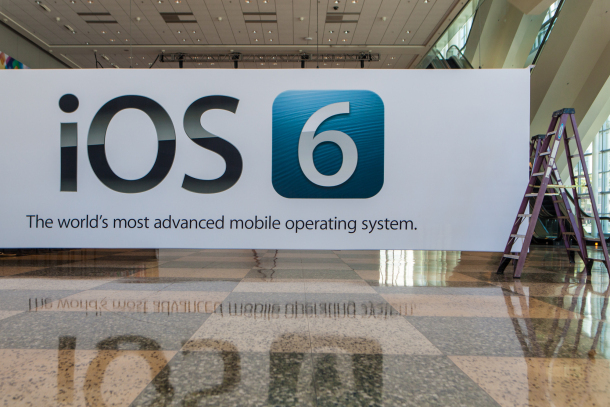 If you happened to be in downtown San Francisco recently, you most likely saw that Apple is getting ready to host its annual Worldwide Developers Conference. The event begins on Monday but earlier this week, banners were being placed inside and outside San Francisco's Moscone Center in preparation for the WWDC event.

News.com reports that one of the banners inside the Moscone Center confirms that Apple will indeed be revealing the first official details about iOS 6, the next version of its mobile operating system that's used inside the iPhone, iPad and iPod Touch. The "6" in the logo seems to be have some kind of water ripple effects inside.

While Apple has yet to reveal anything about iOS 6 and its new features, there are certainly lots of rumors about what Apple has planned for the OS. Those rumors include some kind of deeper integration with Facebook and the introduction of an all new mapping tool that would replace Google Maps.

Apple wil talk a lot more about iOS 6 during the WWDC keynote address on Monday. That will be delivered by Apple's current CEO Tim Cook and Apple might also reveal some new additions to its Mac lineup of PCs and notebooks and announce a final launch date for "Mountain Lion", the latest version of Max OS X.