A new report from research firm Flurry Analytics found that based on their samples, iOS apps make four times as much revenue as their Android counterparts. Flurry also found that developers are choosing to start new projects on iOS over Android at a ratio of almost 3 to 1.

These numbers come just one week after Google Chairman Eric Schmidt said at the Le Web conference in Paris that "Android is ahead of the iPhone now," and that he believes mobile developers will prioritize Android over iOS in the next six months. Flurry took these words to heart and decided to test the truth of these claims with data.

Flurry's data pool is not insignificant. They track over 55,000 companies that use Flurry Analytics in more than 135,000 applications. Flurry estimates that their analytics powers approximately 25% of all apps downloaded from the App Store and Android Market combined. Flurry tracked new project starts throughout 2011, during which the developers being tracked by Flurry set up analytics for approximately 50,000 new apps. Their findings show that close to 75% of new projects start on iOS compared to Android, even as the number of total new projects increased each quarter. They found that developer support for Android has actually declined from over one-third of all new projects in Q1 2011, down to about one-quarter more recently. 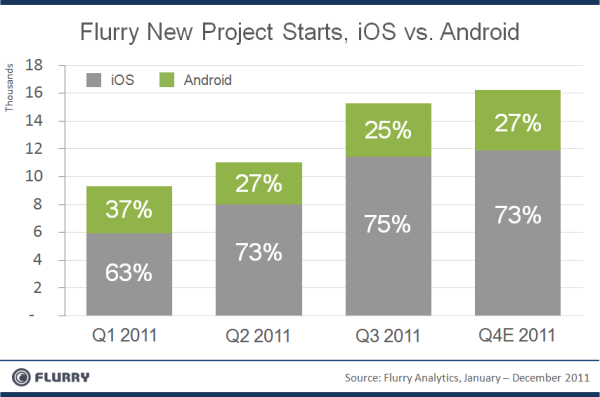 Further, Flurry pulled a sample of in-app purchase data from some top apps that had versions on both iOS and Android, for a total of several million daily active users across the apps. The data showed that for every $1.00 generated on an iOS app, the same app generated a mere $0.24 on Android. 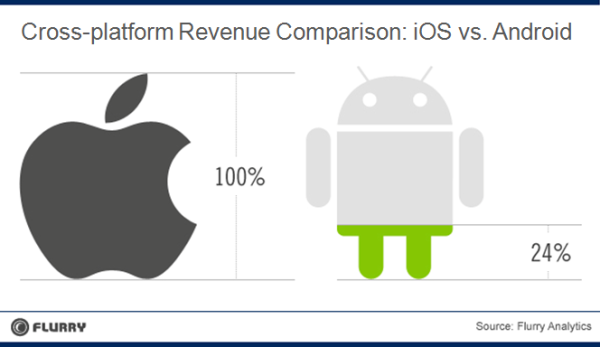 Flurry speculates that the rift between these numbers is due to the consumer's ability to pay for apps or in-app purchases. With iOS, consumers are forced to associate either a credit or gift card to an iTunes account, which theoretically means that 100% of all iOS device users have the ability to purchase. (UPDATE: Readers have pointed out that this is not true in all regions.) This is not the case for the Android Market, though Google's recent integration of Google Wallet and Google Checkout is an attempt to correct this.

While none of this data compares total revenue for the two competing platforms, Google does seem to have a ways to go to catch up to the sheer profitability of iOS's apps. It's this profitability that seems to be spurring developers to favor iOS over Android, at least for the moment.