The iPhone 5 features an elongated 4-inch screen as well as other hardware and software improvements.

After months of speculation, Apple has announced the iPhone 5 at a press event in San Francisco on Wednesday. The features of the new iPhone match images and information leaked in recent months, including an elongated 4-inch screen with a 16:9 aspect ratio.

Phil Schiller, Apple's senior vice president of worldwide marketing, announced the new phone at the event, saying the new phone "is made entirely of glass and aluminum – it's designed and built to an exacting level of standard unlike anything we, or anyone in our industry, have made before."

The most noticeable change compared to previous versions of the iPhone is the iPhone 5's new 4-inch, 1136x640-resolution display which features a pixel density of 326ppi. Touch sensors have also been integrated into the display, as previously rumored, creating a thinner profile and more responsive input.

From a performance perspective, Apple's new iPhone will be powered by an A6 processor, which the company says will be twice as fast for both general processing and graphics rendering when compared to the A5 processor in the iPhone 4S. Schiller introduced Rob Murray, an executive producer at EA Studios, who agreed with Apple's performance claims and said the A6 will provide graphics that are "full console quality."

Other improvements in the iPhone 5 include an enhanced microphone array and higher quality cameras. Audio quality on the iPhone 5 has been improved compared to previous iPhone iterations through the inclusion of a three-microphone array – one microphone on the bottom, a second on the front and a third on the back. The phone will feature a rear-facing, 8-megapixel camera with a dynamic low light mode and precision lens alignment. Panorama photographs of up to 28 megapixels will be possible through the rear-facing camera. The front-facing camera has also been improved and is capable of 1080p FaceTime calls. 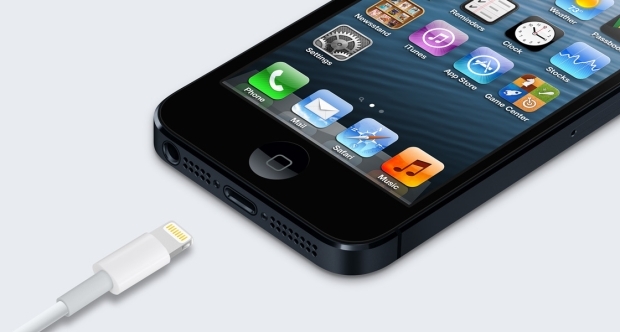 Besides the phone's new hardware, Apple announced a new digital connector for the device called "Lightning." The Lightning connector will replace the 30-pin connector Apple has used since the original iPod and features an easy-to-use design that's 80 percent smaller than the 30-pin connector. For devices that use the old 30-pin port, however, Apple has created an adapter to connect through the new interface. Also being updated for the first time since the original iPod are the company's earbuds. The company says the new earbuds, which it's calling "EarPods," will offer improved audio quality and comfort.

From a software perspective, the iPhone 5 will run on Apple's iOS 6 platform and include new features that make use of the longer display. Safari, for instance, has been improved to make use of the iPhone 5's elongated display with a "fullscreen mode" when the device is horizontal.

The iPhone 5 will be available in white or black and come in 16GB, 32GB and 64GB versions. Pricing with a two-year contract begins at $199 for the 16GB version and increases $100 for each increase in storage size. Pre-orders begin Friday, and the device will be available to customers in the United States, Canada, United Kingdom, France, Germany, Australia, Japan, Hong Kong and Singapore on Sept. 21.