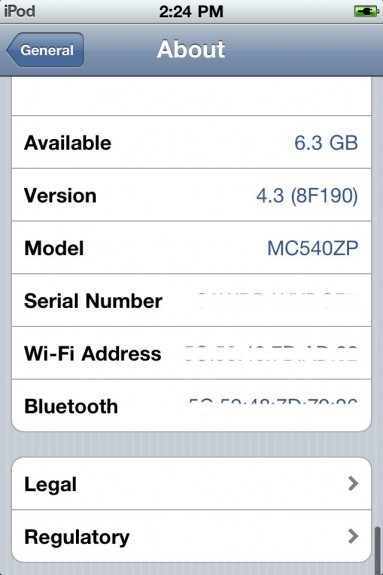 iPod touch owners are reporting strange graphical glitches after updating their devices to iOS 4.3, which was released earlier this month.

Engadget reports that after updating, screens on affected devices seem to flicker and distort. The problem apparently occurs mainly on the lock screen and becomes more obvious with the arrival of a push notification.

Fourth-generation iPod touch devices seem to be the only ones impacted, with users taking to Apple's support forum to report their experiences with the issue. The glitch appears to be relatively common; as of 5.45AM EST, at least two dozen individual users were reporting the same types of problems across two forum topics. Their symptoms, however, differ - some users report ''snowy'' graphics, while others have noticed glitches around the WiFi icon, corrupted graphics or missing icons. At least one user has captured the issue on video, as seen below.

User ''W.I.C'' noted that the issue is reminiscent of the graphical corruption caused by an overclocked graphics card, while ''Anytimes'' installed all three iOS 4.3 beta releases in order and determined that the issue only appeared in the final ''Golden Master'' release. The age of the iPod appears to make no difference and users have been encouraged to make a bug report to Apple if they experience the issue.

Apple has yet to comment on the problems, but they seem to be widespread enough that the Mac-maker will be forced to take some kind of action.