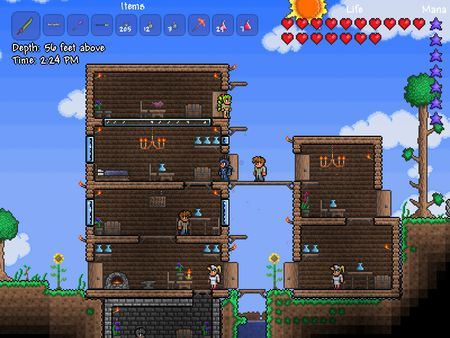 A PC exclusive game that debuted on Steam earlier this week with little publicity or advanced marketing is already generate a ton of sales. In fact some people are already calling it "the next Minecraft". It's called Terraria and at the moment the $9.99 game is the second best selling game on Steam, right behind the heavily publicized fantasy RPG The Witcher 2.

The game comes from indie game developer Re-Logic and has been called a "two dimensional Minecraft" by some reviewers. The game is a platformer-RPG that generates randomly created levels. Players have to mine the materials in the levels to make a variety of tools and weapons. You can use those weapons to fight off creatures in the game or battle other people in Terraria's multiplayer mode. You can also create your own homes in the game world, again just like Minecraft. The game's official FAQ site says that the game only started development back in January of 2011.

In a post on the game's message boards, one of the creators of Terraria said that on the first day of the game's release on Steam last Monday they had up to 17,121 players online at once playing the game. While they don't have the official sales figures yet, the creators say, "Terraria sold at least 50,000 copies" in just its first day. The game could sell over 100,000 copies very soon, according to the post. Re-Logic has already promised that Terraria will have a number of content updates including possibly more multiplayer modes. The FAQ page also says the team is considering releasing the game for the iOS and/or Xbox platforms. You can check out a trailer showing Terraria in action below.