Rumors about Microsoft's next plan for its Windows update beyond Windows 8 started leaking out even before Windows 8 officially launched. In August 2012, word first got out about "Blue", the code name for Microsoft's Windows upgrade plans. Microsoft officially confirmed the "Blue" code name earlier this year.

However, the launch of Windows Blue, now officially called Windows 8.1, is something that will refine the current Windows 8 Modern and desktop UI, rather than full sweeping changes. The Infoworld website apparently thinks Windows Blue-8.1 does not do enough to correct the current path of the OS. 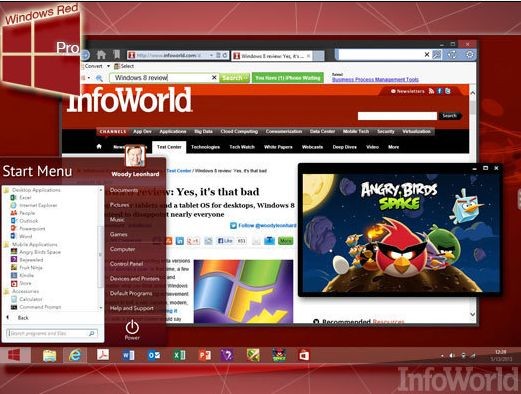 Finally, for notebook-tablet hybrid PCs, Infoworld proposes Windows Red Duo, which has both user interfaces. However, the Modern UI can only be accessed in tablet mode, while the desktop interface comes up only when used as a laptop.

The article is accompanied by a slide show that has concept images of how all these versions of Windows Red would work. Windows Red Pro can run Modern apps on the desktop UI, much like Stardock's own ModernMix program allows, but the Start screen and Charms bar are gone. However, much of the Windows 8 backend features would still be available for Windows Red Pro, including the improved Task Manager, Windows to Go and more. Windows Red Pro would also support Live Tiles, which in this concept would be displayed on the right side of the desktop. 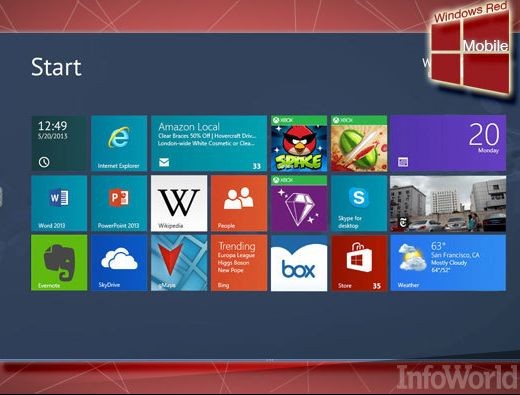 The idea of basically splitting Windows 8 into three separate versions, depending on the form factor of the PC, is certainly interesting. It's more than possible that Microsoft could in fact have a similar scenario in mind for future versions of Windows beyond the launch of 8.1.