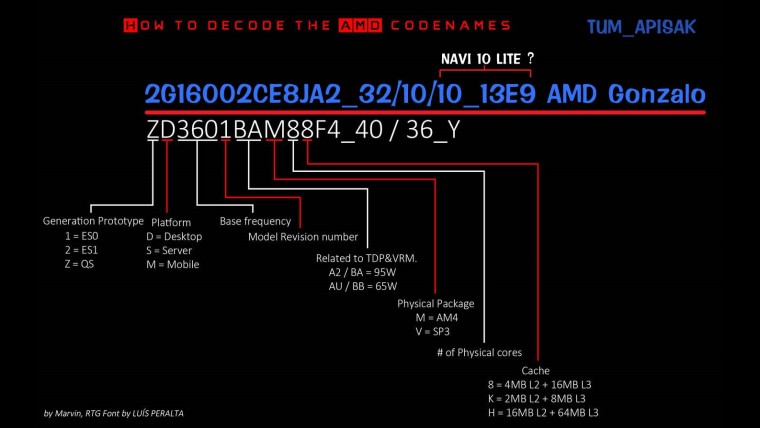 Hardware leaker APISAK has discovered an AMD APU designated: 2G16002CE8JA2_32/10/10_13E9 or Gonzalo. The APU seems to feature 8 cores based on the Zen+ or Zen 2 architecture, with a base frequency of 1.6GHz and a boost frequency of 3.2GHz. Additionally, it looks like it will have a Navi Lite GPU built on the 7nm process node.

In the picture above, a break down is provided on how to decipher AMD's designations for its processors. From this, we can gather some specifications of the unearthed APU. If the decoding on the picture is accurate, Gonzalo (blue) is currently a prototype, with the leaker suggesting the G platform stands for Gaming , and that it could be powering an upcoming next generation console.

The processor base frequency seems to be at 1.6GHz, and, according to Computer Base, the boost frequency will be 3.2GHz, going off the 32 that follows the underscore. It appears to be the first iteration of the prototype, as it has a 0 for revision number (not yet been revised) and the TDP&VRM code is not defined below. Further in the picture, it shows the APU will be based on the AM4 socket, will have 8 cores and come with 4MB of L2 cache and 16 MB of L3 cache. Finally, the 10/10 could indicate the base/boost frequency of the GPU, suggesting a 1.0GHz clock speed.

The leaker believes that the 13E9 portion of the designation suggests a Navi 10 Lite GPU as that is the PCI-ID of that specific GPU. If these specifications turn out to be accurate, we can expect a noticeable bump in performance for the next-gen consoles, particularly on the CPU front which has restricted performance in current-gen games.