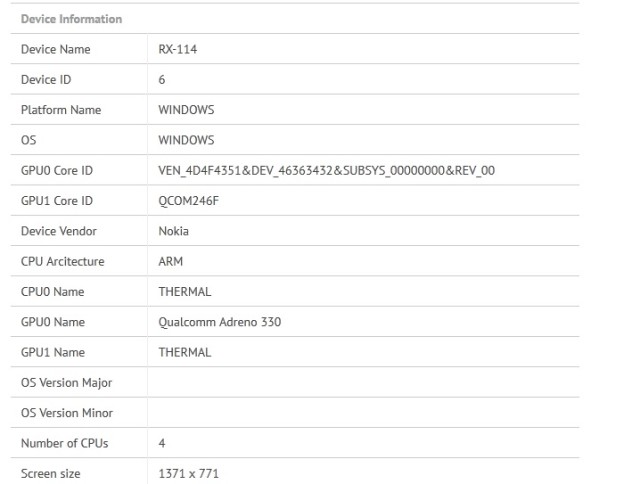 Nokia's tablet could be a reality very soon, if sources are to be believed. You may remember that the company's CEO, Stephen Elop, teased the possibility as long ago as February of this year.

Specifications shown through 'GFXBench' indicate an Adreno 330 and a quad-core processor; keeping with a very meaty Snapdragon 800 system-on-chip, while also giving the RX-114 designation.

The RX-114's resolution is an unusual-sounding 1371x771. In all probability, it will be using the same resolution scaling as Microsoft's Surface Pro, likely increasing the figure to a more impressive 1920x1080.

Nokia's choice of internal name would also indicate some kind of larger device; the company's Booklet 3G laptop bore the name 'RX-72'. Of course RX-114 is unlikely to be the name used for marketing, but could this be the rumored Rivendale?

However, it's worth noting that OEMs are moving away from Windows RT in favor of Windows 8 and Nokia may also be following this trend. If this is true than these results may just come from a prototype device, an emulator or even a device that will launch with Windows 8.1. At the end of the day it could also be fake, so remember to take this with a generous amount of salt.