If you follow my work, then you know that I work with Lenovo a lot on product reviews. For the IdeaPad Slim 7 though, it's a bit different, because this product didn't come from Lenovo. AMD actually wanted to send me this one to show off its Ryzen 4000 processors, and it became very apparent that this machine does just that, even though I've already reviewed a number of Ryzen 4000 PCs.

It's also an overall excellent PC, with a solid keyboard, a stylish design, and more. I can't find a price for this specific configuration, but it starts at $899.99 on Lenovo's website.

The color of the model that AMD sent me is called Slate Grey, and I'm probably visibly disappointed in the video above when I saw that that's what the company sent me. That's because it also comes in this beautiful maroon color, which is what's shown off in the reviewer's guide. Keep in mind that IdeaPad is strictly a U.S. brand, as this is called the Yoga Slim 7 outside of the U.S., so it might only come in Slate Grey here. 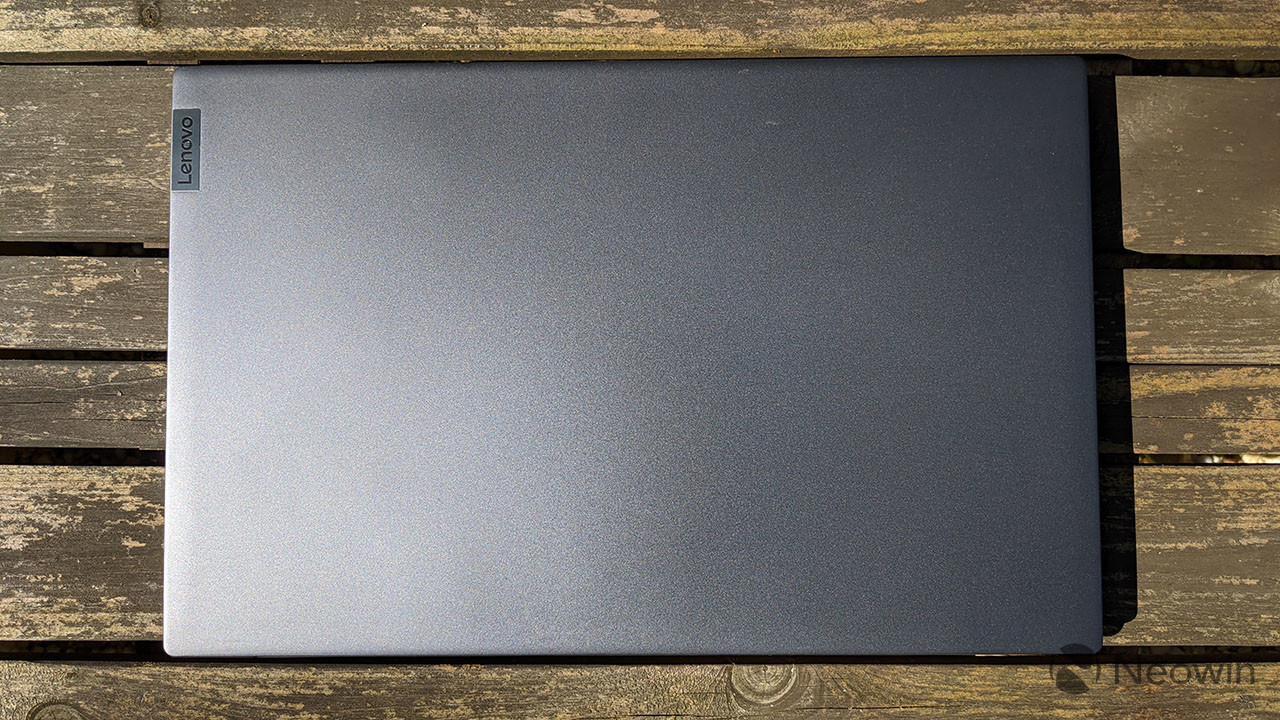 The only actual difference between this and the Yoga Slim 7 is that there's no Yoga branding stamped in the lid. The other reason I didn't care for the Slate Grey color is because I've seen it in tons of Lenovo laptops, and I've never found it to be particularly inspiring. I'd love it if the company added some metallic accents in some places just to sexy it up a bit. 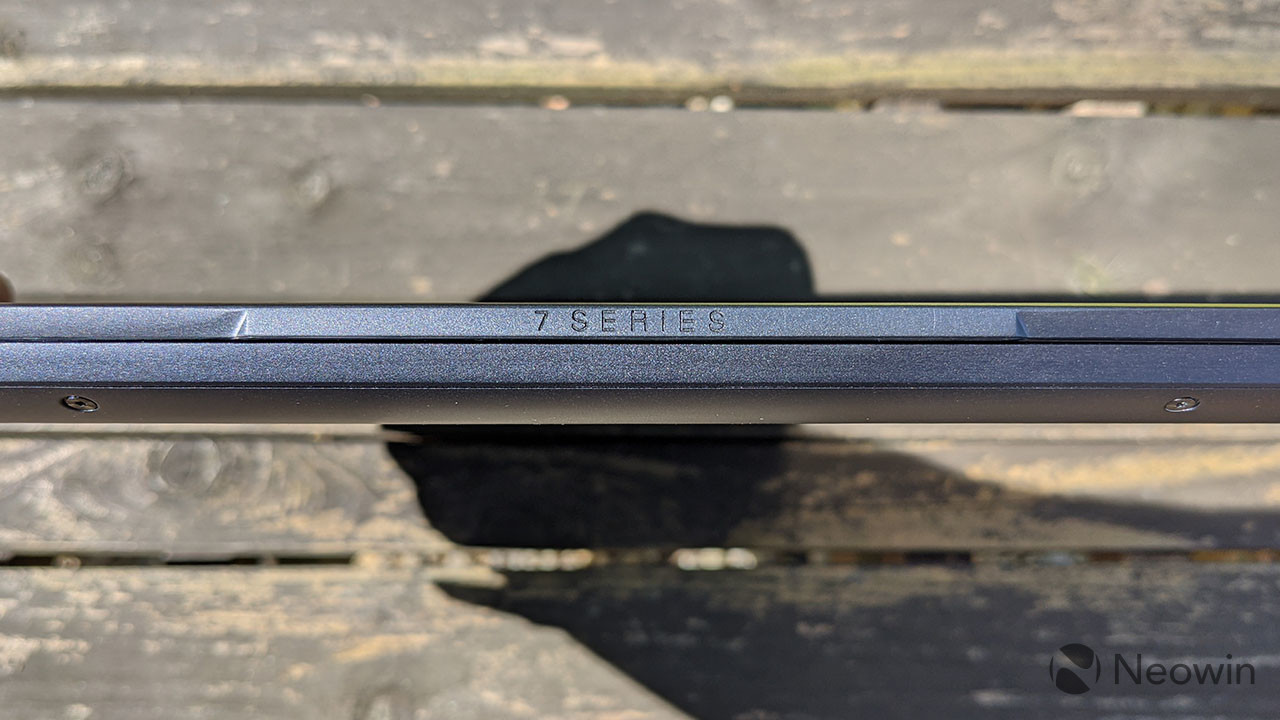 The only really defining branding is the '7 SERIES' stamped in the lip. It's likely that elsewhere, that actually says 'Yoga 7 SERIES'.

With an aluminum chassis, it weighs in at just over three pounds, which is pretty comfortable considering that this is actually a pretty powerful PC, more powerful than most ultrabooks, but we'll get into that in the performance section. 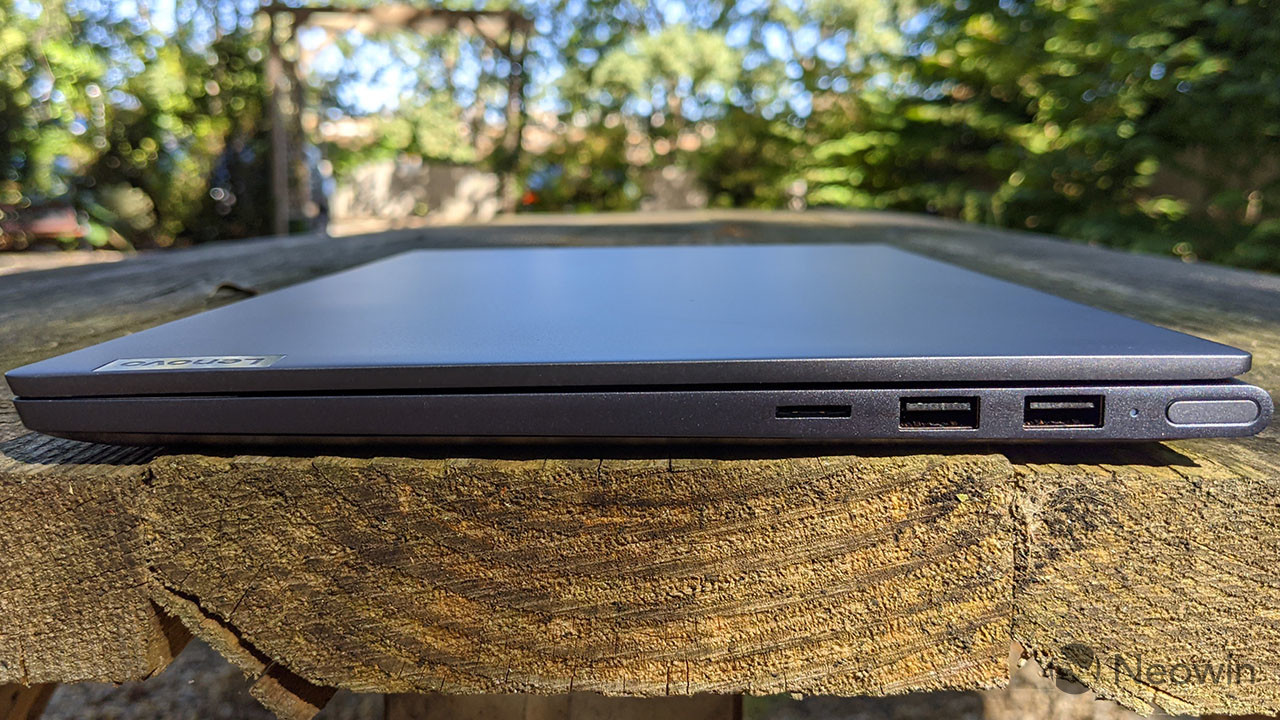 On the right side, you'll find two USB 3.2 Gen 1 Type-A ports for 5Gbps data transfer speeds, which is fine. That's also where you'll find the power button and a microSD slot. 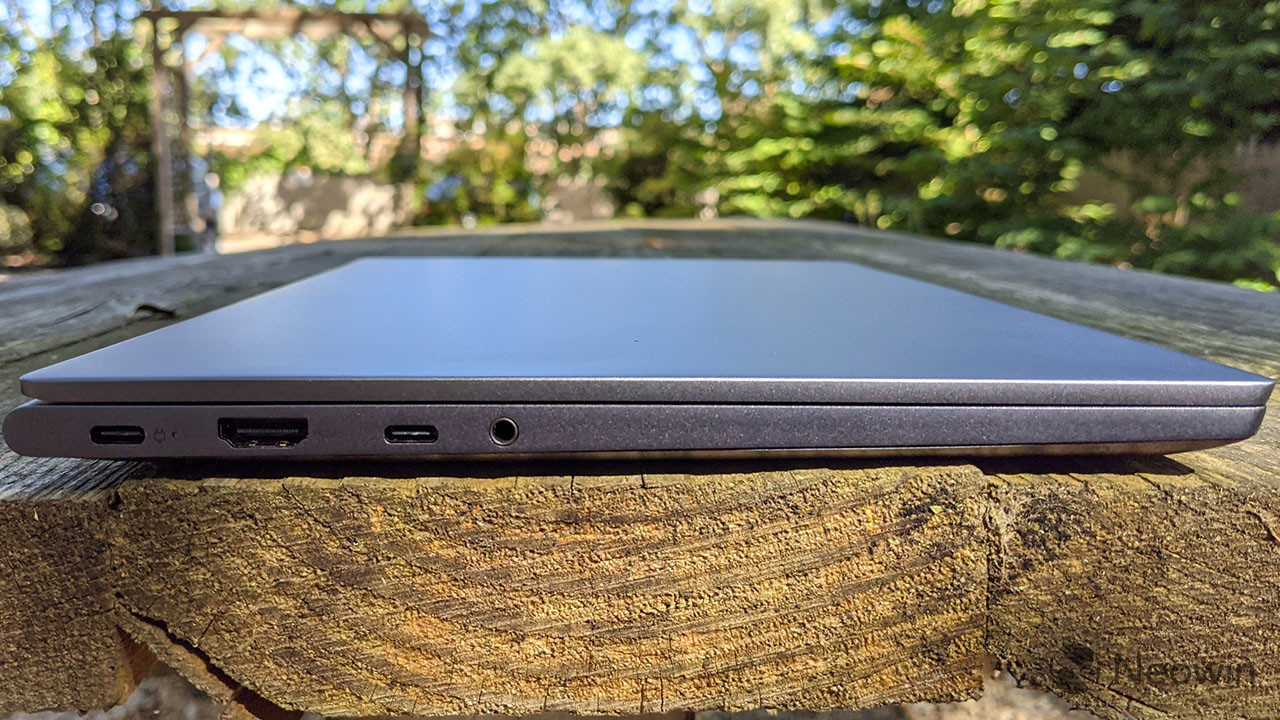 The ports, however, are probably my biggest complaints about this device. Unsurprisingly, there's no Thunderbolt 3. I've still never actually seen an AMD-powered PC with Thunderbolt, although it is possible. But my big complaint is that only one of the USB Type-C ports have display out.

Personally, I usually work with a Thunderbolt 3 dock, so I can just plug it into a laptop and my two 4K monitors are good to go. When I come across a laptop that doesn't have Thunderbolt, that's OK too because one of the monitors is connected via USB Type-C, so I can just connect the dock with one monitor attached, and the other monitor to the two USB Type-C ports. Of course, I can't do that here because only one USB Type-C port supports display out.

Luckily, it does have HDMI 2.0. If I was really going to make this my forever PC, I'd connect one monitor via USB Type-C and connect the other via HDMI.

The Lenovo IdeaPad Slim 7 packs a 14-inch FHD display at 300 nits. It's not a convertible, as the company's 'Slim' branding implies. It also doesn't support touch. As far as 14-inch FHD displays go, this one is pretty good, although it doesn't really stand out to me. 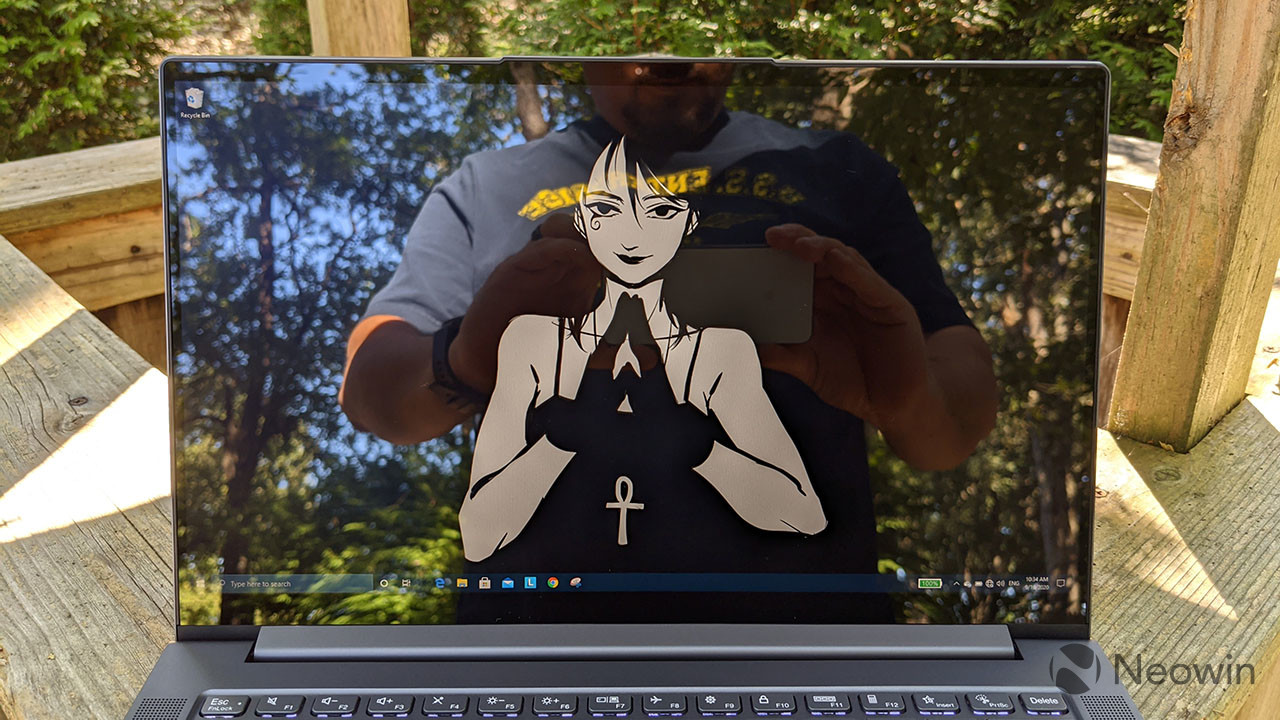 For one thing, it is very glossy, although that's kind of expected in a premium PC like this. I do wish that it was bright enough to compensate. 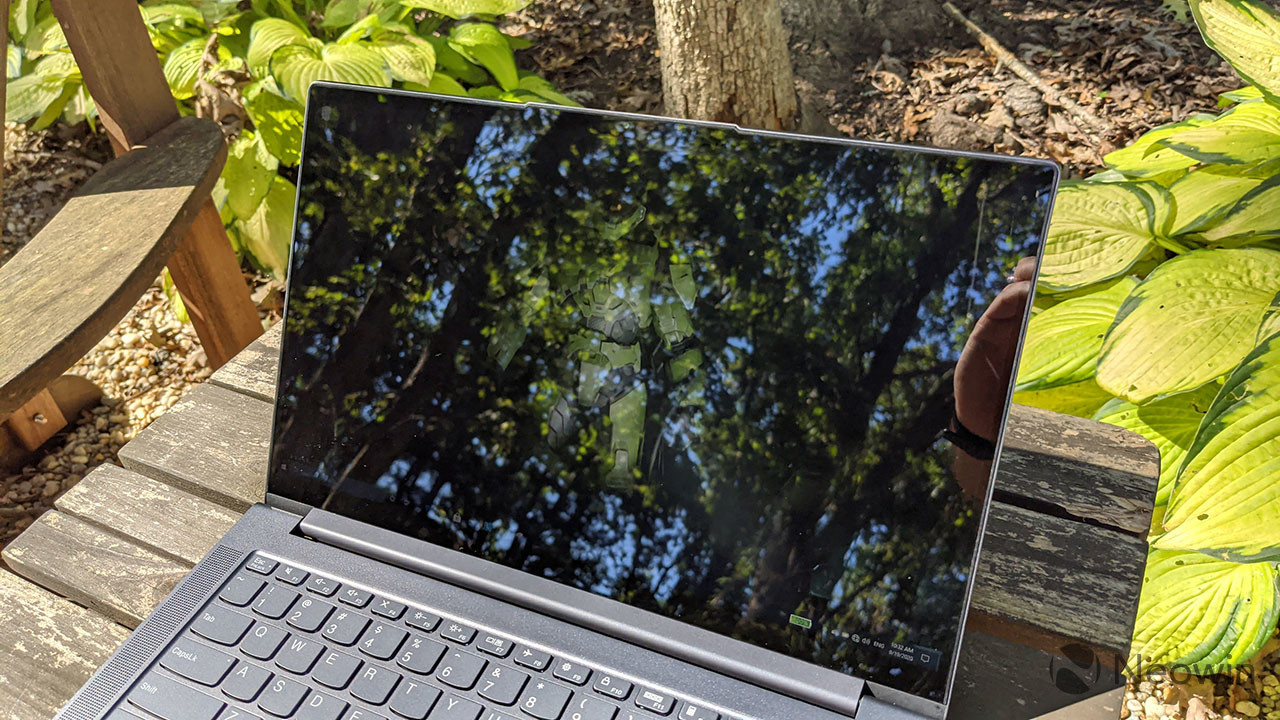 The color accuracy is great though, and so is the viewing angle. You can look at this screen from a solid 178 degrees and not see any noticeable distortion. But that's what it adds up to. It's a solid screen that won't blow your socks off. 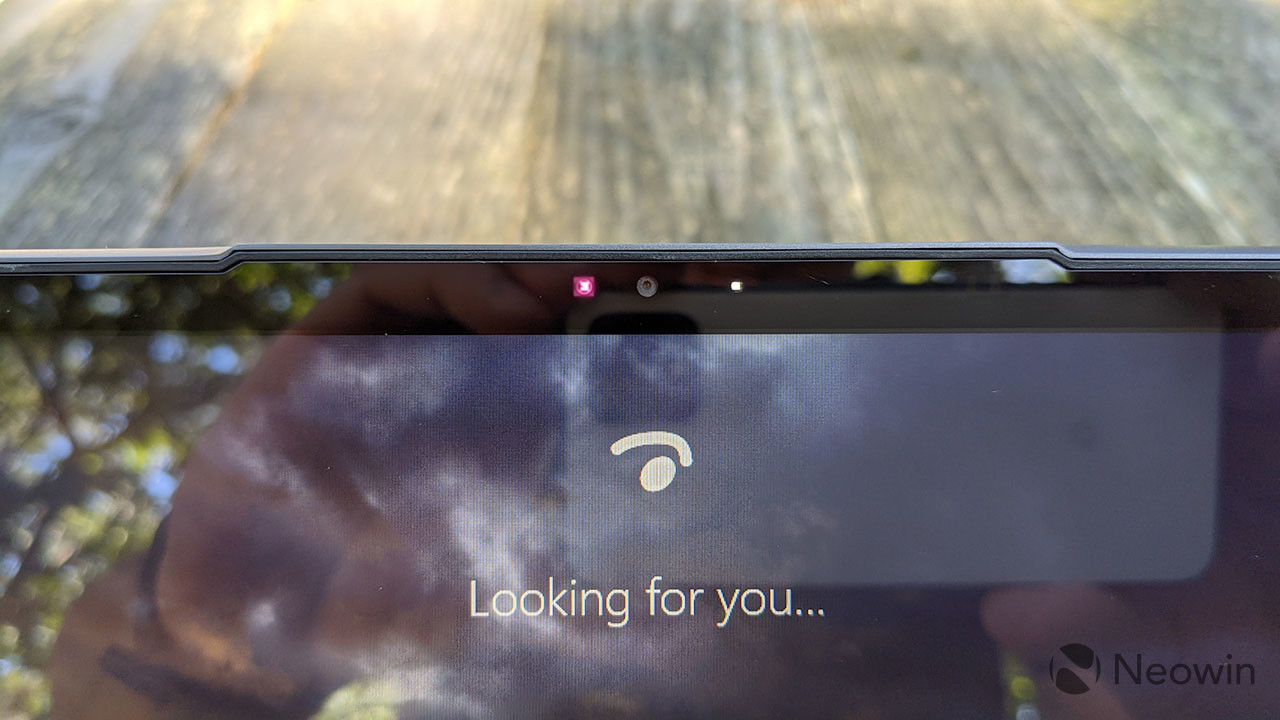 The screen actually has narrow bezels on all sides, and the top one has Lenovo's reverse notch design. Not only is this for brand recognition, but it also just makes it easier to open the laptop. And of course, it makes extra space for a webcam and an IR camera. 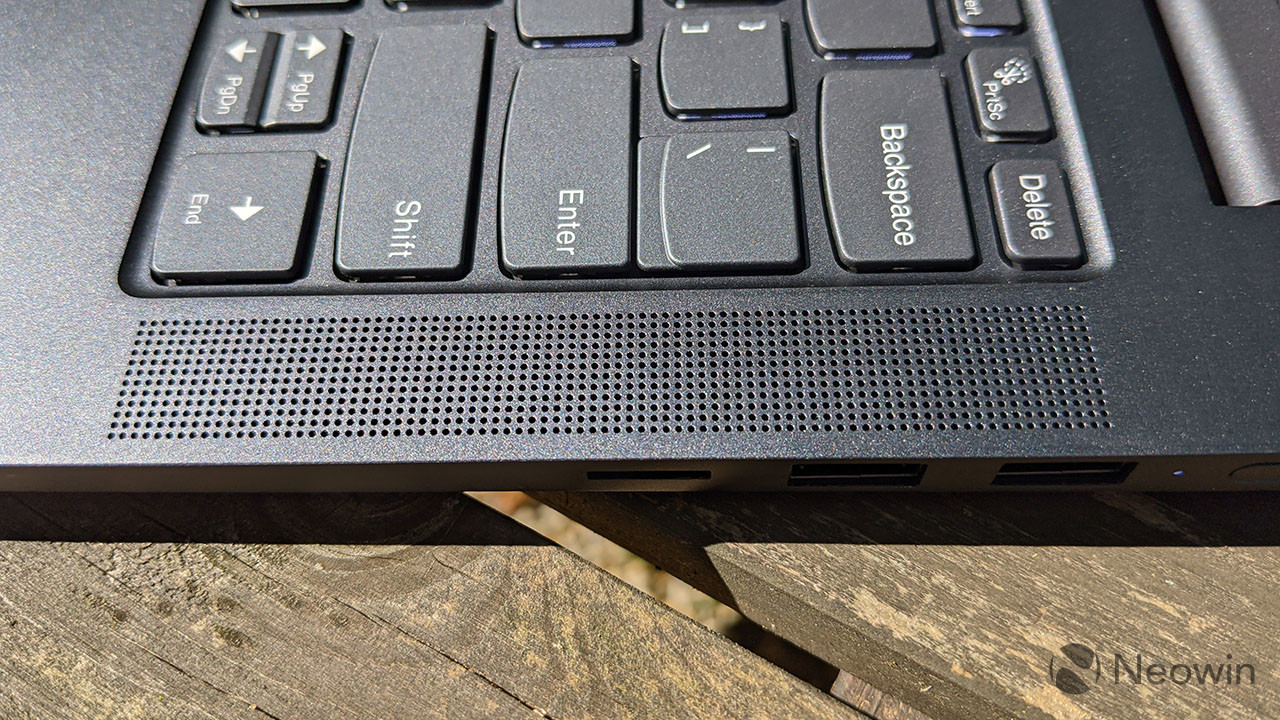 What just might blow your socks off are the two 2W speakers that sit on either side of the keyboard. They sound great, with clear and rich sound, and they can get pretty powerful. Personally, I use them for listening to music while I work, but they'll be great for anything, from video calls to streaming movies.

The IdeaPad Slim 7 actually has an excellent keyboard, and it's among my favorite around. I almost always find that Lenovo makes great keyboards, with the odd man out here and there. I'm starting to like their consumer laptop keyboards more and more too. It's so comfortable, and it feels like it has just the right amount of resistance to feel solid, but not hurt your fingers. It gives enough so that you don't have to press hard, but it doesn't feel loose. It's just right. 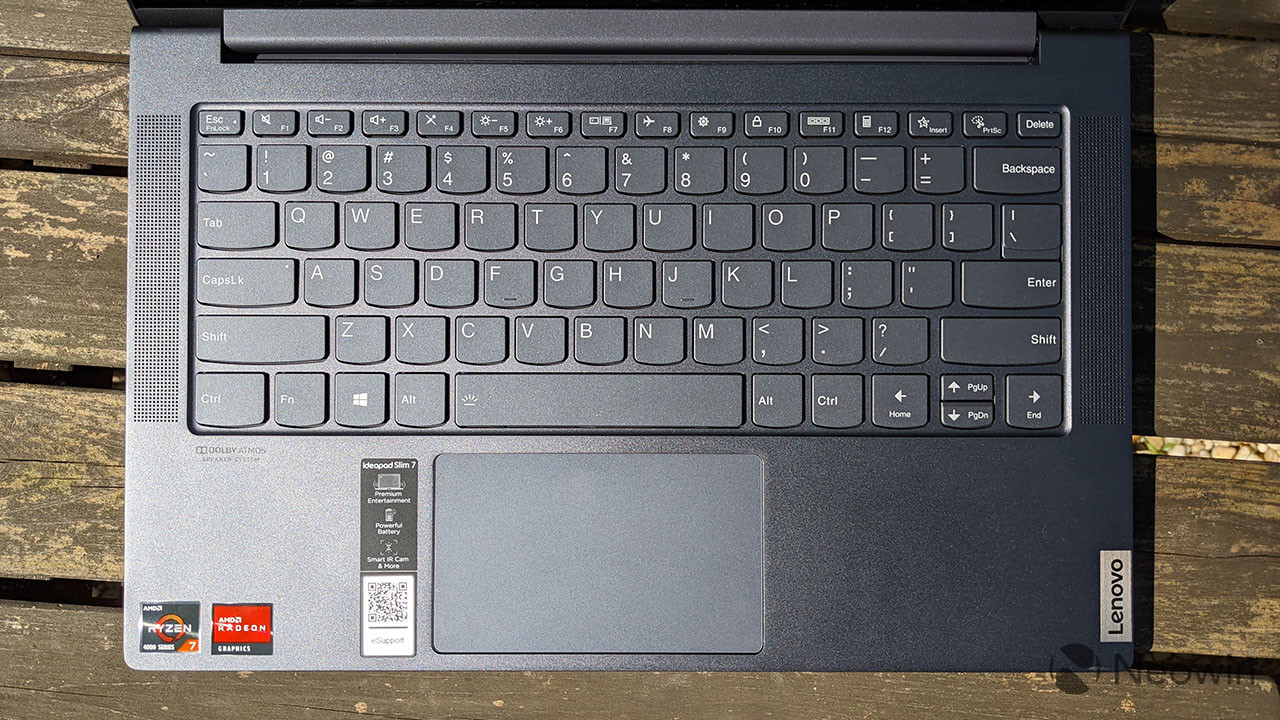 Naturally, the keyboard is backlit. One thing you'll notice is that it's fairly shallow, something that's common in consumer laptops. It's just that if you're comparing it to a ThinkPad, this keyboard is much shallower.

One thing missing, surprisingly, is a fingerprint sensor. It just surprises me because I so rarely see a Lenovo PC that doesn't have one. Lenovo pioneered fingerprint sensors on PCs with its ThinkPad lineup, long before Windows Hello was a thing. But of course, this machine does still have an IR camera for facial recognition, and if I had to pick one or the other, I'd pick the IR camera in a heartbeat. 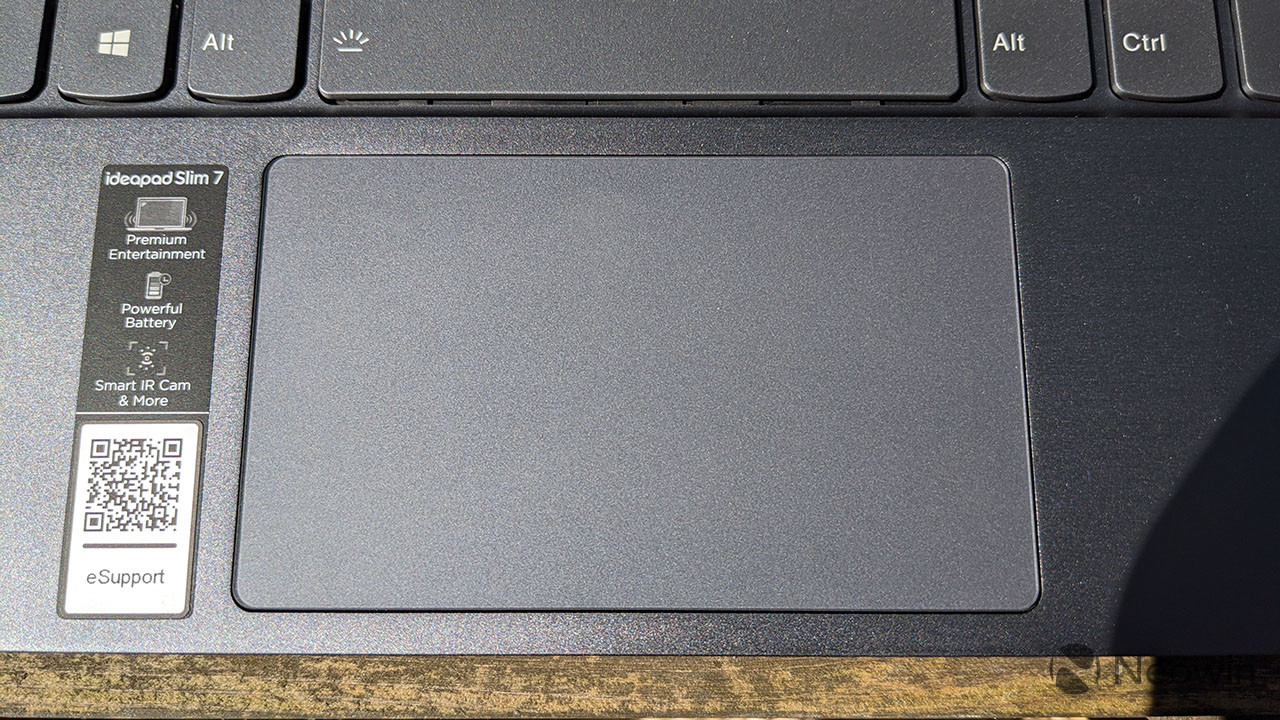 The Precision trackpad is clickable, and it's fine. The nice thing about Precision trackpads is that they're fast and responsive, supporting the gestures that you're used to. Of course, they're so common now, with HP finally making the switch in its premium laptops.

OK, here's the good part. The performance on this thing is a phenomenal, and it really showcases the best of AMD Ryzen 4000. Here's the deal. AMD Ryzen 4000 is built on a 7nm process, while Intel offers 10nm and 14nm in Ice Lake and Comet Lake, respectively, both of which are under the 10th-gen umbrella.

With eight cores, 16 threads, and a 25W TDP, this is one of the most powerful three-pound 14-inch PCs that you're going to find. You can actually do a bit of gaming on here, if you want. For benchmarks, I used PCMark 8 and PCMark 10.

As you can see, the Slim 7 actually smokes anything else I compared it to. To be clear, the Ryzen 7 PRO 4750U also has SMT, so the 25W TDP makes a big difference here.

You might be surprised to hear this at this point, but battery life is pretty awesome as well. As usual, the power slider was on the notch above battery saver. I kept the brightness at about 75%, as that's where I needed it with the available brightness. With all of that, I got about eight hours of regular usage, meaning working in the Chrome browser, OneNote, To Do, Slack, and so on.

Eight hours is really good, and it's rare to see in a laptop with this kind of thickness and weight. I want to be clear about how impressed I am with the battery life considering how much power is in here. Eight hours is kind of a magic mark, as it lets you get through a workday without charging it.

The Lenovo IdeaPad Slim 7 has the best performance that I've seen from a three-pound PC, and that's why I'm so quick to call it a showcase for what AMD Ryzen 4000 has to offer. With a 25W octa-core CPU, there's just nothing out there that compares. AMD Ryzen 4000 is already better than Intel Ice Lake, but this really kicks it up a notch. 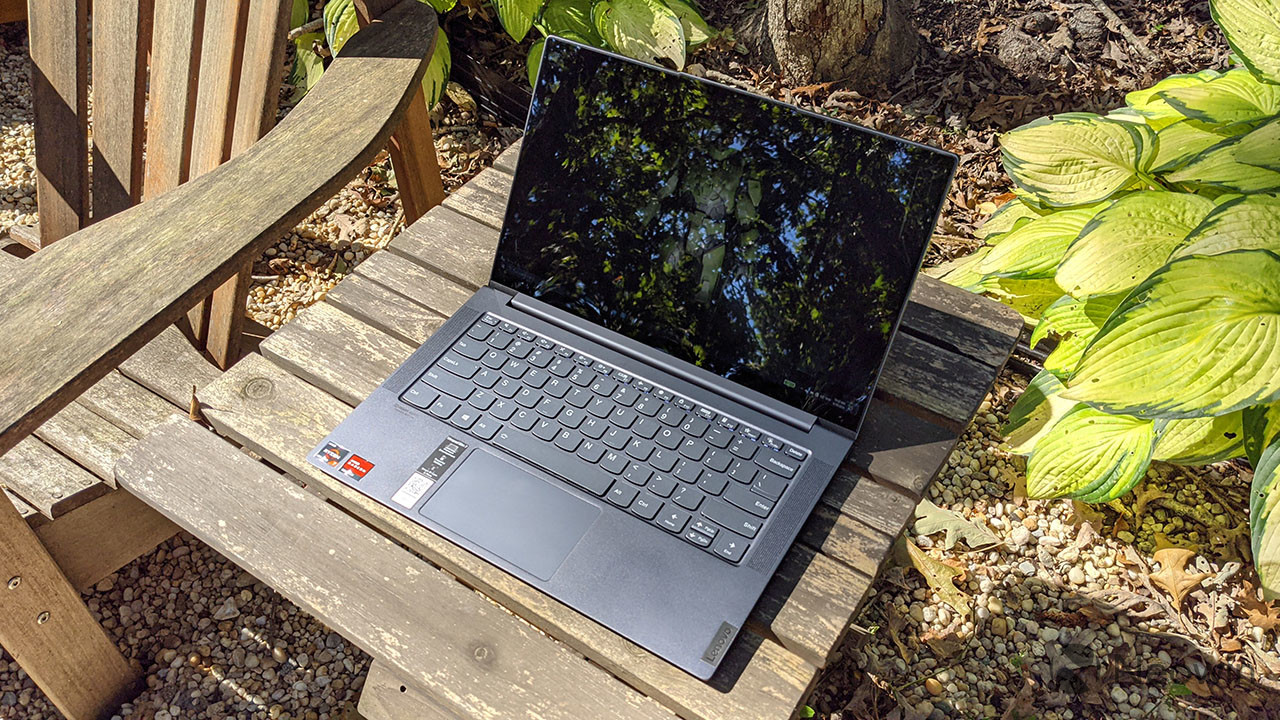 As always, there are a few things that I'm willing to complain about. The biggest one is the port selection. If we can't have Thunderbolt 3, then I really want two USB Type-C ports with DisplayPort. My other complaint is that this really isn't a great PC for outdoor use, something that I find increasingly important in the age of working from home. The screen isn't bright enough to compensate for how glossy it is, and there's no cellular option.

However, I'd bet that for the vast majority of use cases, neither of those things matter at all. Plenty of people spend years with a laptop without ever plugging it into a third-party monitor.

This is an awesome laptop. Aside from the excellent Ryzen performance, it also has lovely Dolby Atmos speakers, and more importantly, an excellent keyboard that adds to the pleasure of using the IdeaPad Slim 7. If you want to check it out on Lenovo.com, you can find it here.