Lenovo has just unveiled a slew of updated products, as well as a couple of brand new ones, just ahead of the start of the Consumer Electronics Show in Las Vegas.

The company is introducing the Lenovo X1 Thinkpad tablet, which features the newest Intel Core m7 processor. But that’s not its only defining characteristic, as the X1 tablet is what Lenovo calls a ‘modular tablet’, with users being able to purchase additional modules based on their needs. For example, say you need your tablet to last longer than the rated 10 hours it normally does; well all you need to do is buy the “Productivity module” that adds an additional five hours of charge. Or you may want to opt for the “Presenter module” which comes with an HDMI port and a pico-projector.

The X1 tablet also features a detachable Surface-like keyboard, LTE-Advanced connectivity, and, perhaps quite uniquely for a tablet, a detachable rear panel “for serviceability and upgrades”. The ThinkPad X1 tablet will be available in February starting at $899, with the productivity module adding another $149 to your bill or $279 for the pico-projector. 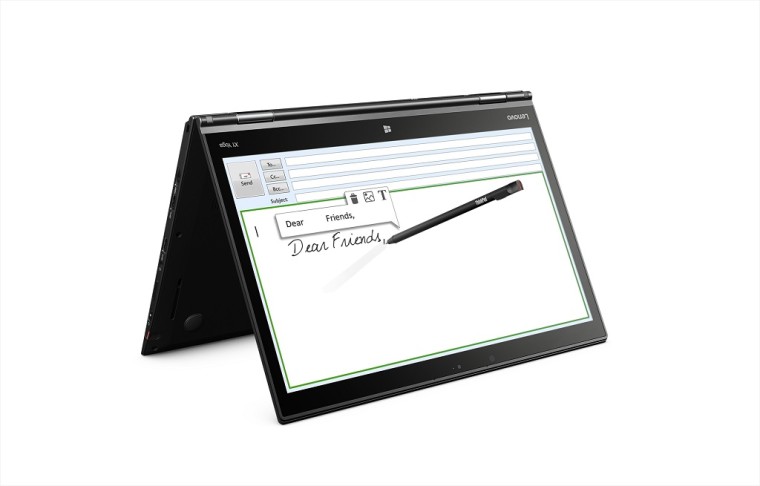 Lenovo is also introducing the Thinkpad X1 Yoga, that’s a very thin and light convertible. The device comes in at just 0.66 inches thin and 2.8 pounds. The X1 Yoga also feature retractable keys on its keyboard while the device is in tablet mode and a pen that housed and charged inside the device so you don’t have to worry about losing it. Finally, the Thinkpad X1 Yoga also features an optional OLED display. The device will be available this month starting at $1449.

And last but not least, there’s a updated ThinkPad X1 Carbon laptop that includes some user suggested improvements and updated specs such as extra memory and storage, better connectivity and an overall lighter footprint at only 2.6 pounds. The X1 Carbon will be out this February with a starting price of $1299.