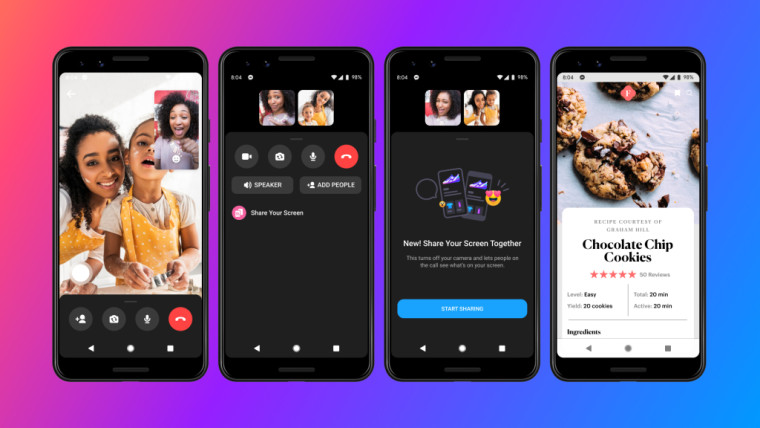 Facebook has today announced that it is bringing Messenger and Messenger Room’s screen sharing capability to the company’s mobile apps. Up until now, the feature was enabled when using video calling only in the desktop offerings. Users can share their device screens with eight people in Messenger and with up to 16 people in Messenger Rooms. The Rooms feature lets up to 50 users get on a video call, and began rolling out to all Facebook users earlier in May.

The social media giant terms the feature a “fun and engaging way to connect and share with family and friends on video calls”. The introduction on the feature on Messenger’s Android and iOS versions come at a time when video calling apps’ usage is surging, with people staying at home and away from family in times of the pandemic. According to the company, the screen sharing feature lets users “share memories from your camera roll, shop together online, co-browse social media, and more”.

The service will also add features that will let Rooms creators limit who can share their screens. In addition to those privacy controls, the firm also intends to expand the feature to support sharing with up to 50 people in Rooms. While the feature is not exactly aimed at professionals and is more of a consumer-focused addition, it could be a nifty addition for those that not only want to share memories but also help with demoing functions on a mobile device and more.

The Messenger app on Android and iOS should begin receiving an update enabling this feature starting today. However, as with such updates, it could be some time till all devices receive the update, as the rollout is staggered and should be made available in waves.