Back in October 2021, we saw evidence that Meta is developing a smartwatch to rival Apple's offering. Perhaps the most interesting detail revealed about the hardware was that it would house a front-facing camera capable of recording videos and taking images.

Although we only saw renders of this purported watch, the renders showed a display shaped similar to an Apple Watch - basically square with rounded corners -, interchangeable wrist bands, and a button on the right side of the device. However, a new report now claims that Meta has paused development on this piece of hardware. 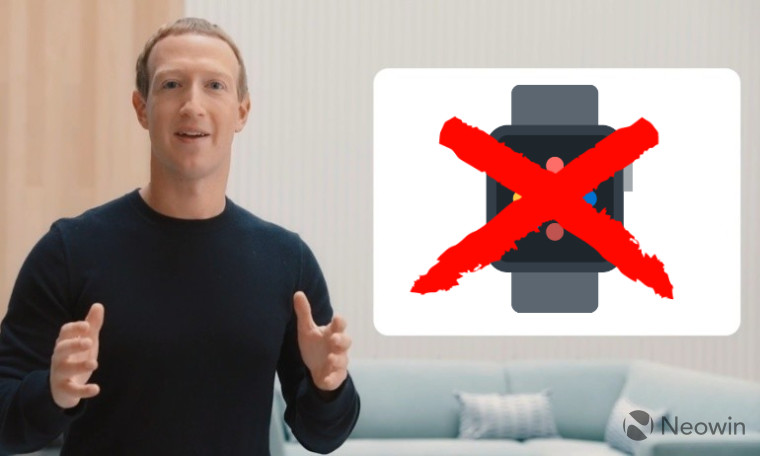 Bloomberg reports that Meta's watch - codenamed "Milan" - had been in development for two years, but employees working on the project were recently informed that the device won't be put into production after all. Originally, it was planned for release in 2023 with a price tag of $349.

While Meta obviously hasn't confirmed any reports about this watch, there are a couple of reasons that could have led to suspension of development activities.

The first one deals with the technicalities of the hardware itself. Bloomberg says that the current prototype also hosted a camera on the back of the display so you could quickly take off the straps and snap some photos at better angles. However, this design interfered with another sensor that used electromyography to translate your wrist movements into controller-like movements. Considering Meta's big bet on the Metaverse, this was a crucial requirement because it meant that the watch could be used to control digital experiences through hand movements in its vision of the Metaverse.

The second potential reason relates to cost-cutting measures. In its latest earnings call, Meta announced that it would decrease annual expenses by $3 billion due to the recent economic downturn. This meant that Meta would have to carefully decide where its budgets and resources are allocated and the watch simply may not have made the cut. It is important to note that the watch was being developed by Meta's Reality Labs department and CEO Mark Zuckerberg had already noted that given the exploratory nature and long-term projects being worked on, the associated expenditure will make a significant dent in profits.

Bloomberg also had a look at videos and images of the watch prototype. According to these, the Meta watch would have featured a removal watch face with a golden casing, two buttons on one side, a 5MP front camera, a 12MP rear camera, internet and cellular connectivity via an eSIM, social networking and activity tracking apps, and up to 18 hours of battery life.

Although the current iteration of the Meta watch may no longer be in development, it wouldn't be surprising to see Meta returning to this idea in the future after re-strategizing. This is not the only project that has gone through some changes. Meta is reportedly refocusing its Portal devices to meet enterprise needs as well.