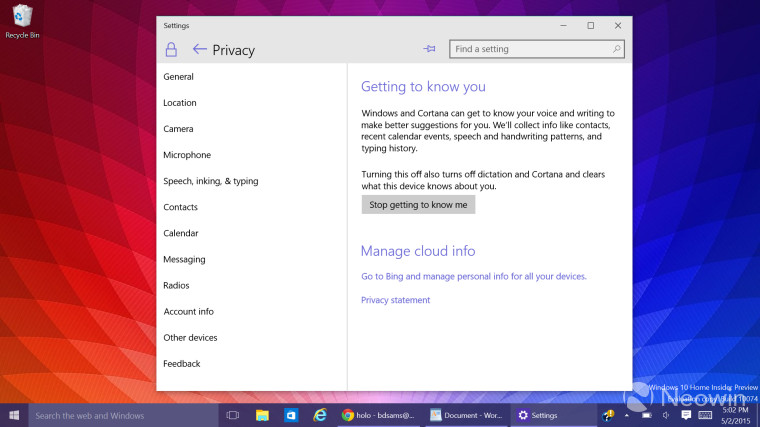 Last week, during Build, Microsoft released a new build of Windows 10, 10074 and with it comes several new features and general improvements throughout the OS. One feature that has been updated in this release is the ability to easily clear Cortana's saved information about the user.

To help Cortana create customized experiences the user, it tracks a user's calendar appointments, handwriting patterns, typing patterns, and other similar items. If a userdoes not want to use Cortana, theycan turn the feature off and have all of that content erased.

The above is done by going to the 'Privacy settings' option under 'Speech, inking and typing' and then have Cortana 'Stop getting to know me.' After that button is clicked, another pop-up window will appear that tells the user that by disabling this feature, Windows 10 will turn off Cortana and dictation.

For those who are concerned about their privacy and wanting to limit how much information they send to tech companies whose products they use, this feature will allow them have greater control with Windows 10.

This is yet another privacy related feature we have seen Microsoft introduce; in earlier builds of Windows 10, the company started shipping fine grain control over what apps can access which features and data on a user's machine.