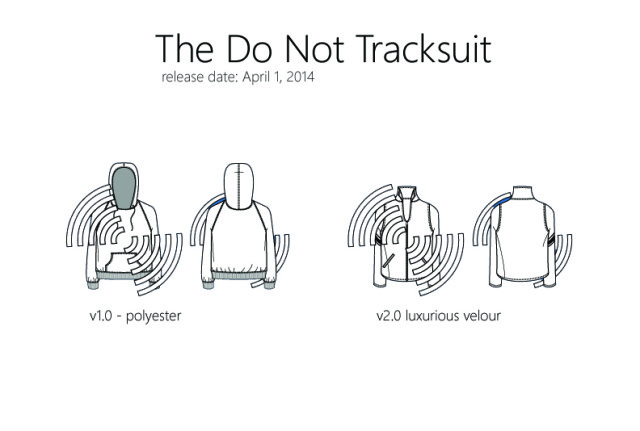 Many of you may be familiar with Microsoft's policy of having the Do Not Track setting as the default for Internet Explorer 10. Today, Microsoft offers up an April Fools' Day joke that extends that attitude to the real world.

The joke involves the newly revealed "project" called the Do Not Tracksuit. Microsoft says that this piece of fashion, which will be "released" on April 1, 2014, will keep anyone who wears it from being tracked in the real world as well as the virtual world. Microsoft's official blog states:

Using a combination of NFC, RFID, Bluetooth 5.2 and infrared emitter technology optimized in our labs, the Do Not Tracksuit is smart enough to detect specific device/app vectors and neutralize them in accordance with the wearer’s intent. It doesn’t simply block all social media behavior in its proximity. Using proven SmartScreen technology, the suit can tell the difference between your mom tagging a great churro in Foodspotting and a frenemy tagging your photo in Foursquare.

The joke is also a little bit of a jab at Google and that company's upcoming Google Glass hardware. As you can see in the design concept above, the first version will come out in polyester. We can't wait for Microsoft to bring back the '70s fashion in 2014.