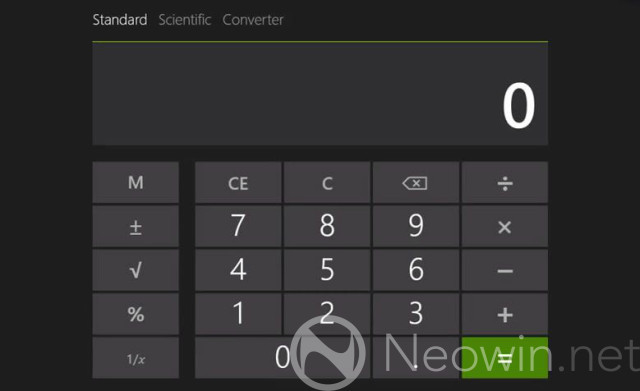 Microsoft is finally offering some details about the upcoming Windows 8 free update, Windows 8.1, about a month before the planned release of its public preview. Microsoft's blog post about Windows 8.1 mentioned that it would release new in-house developed apps for Windows 8.1 but didn't go into much detail.

Engadget got a chance to see some of these new apps in action, and in so doing confirmed that Windows 8.1 will contain new calculator and alarm apps, as previously leaked builds of Windows 8.1 showed. Engadget's preview also revealed some more in-house apps.

One is Bing Food and Drink, which will offer cooks a way to find recipes, along with the ability to create a shopping list and more. One cool feature of the app is that it has a native "hands free" mode. It will apparently allow users who have an ordinary webcam installed on their PC to wave their hands so the app moves to the next page. This will come in handy when people are using their Windows 8.1 notebook or tablet while they are cooking, with their hands covered in all sorts of messy ingredients.

Another new app will be Bing Health and Fitness, which has been made to monitor a person's health. In addition to helping with nutritional and exercise programs, the app has been created to diagnose any health issues a user might be experiencing based on retrieving information from medical databases. Microsoft will also include an app called Reading List in Windows 8.1, designed to save content found online to your PC to read at a later time or offline; it will synchronise saved content across devices, with the functionality being added to Windows Phone 8 at some point in the future.

Engadget's preview of the new Windows 8.1 apps did not mention the Sound Recorder or Movie Moments apps that were seen in the early leaked builds of the OS. There's also no word on if there will be a Modern UI version of a File Manager app for Windows 8.1, which again was found in those leaked builds.