The controversies surrounding government surveillance of citizens have been well documented in recent weeks and months, and many of the tech companies that most of us rely on every day have, uncomfortably, found themselves at the heart of a global debate regarding user privacy.

Today, eight of the world's tech giants - Microsoft, Apple, Google, Yahoo, Aol, Facebook, Twitter and LinkedIn - spoke with one voice, describing an "urgent need to reform government surveillance". In an open letter - addressed to President Obama and Congress - the companies presented a united front that sides firmly with the rights of their users. 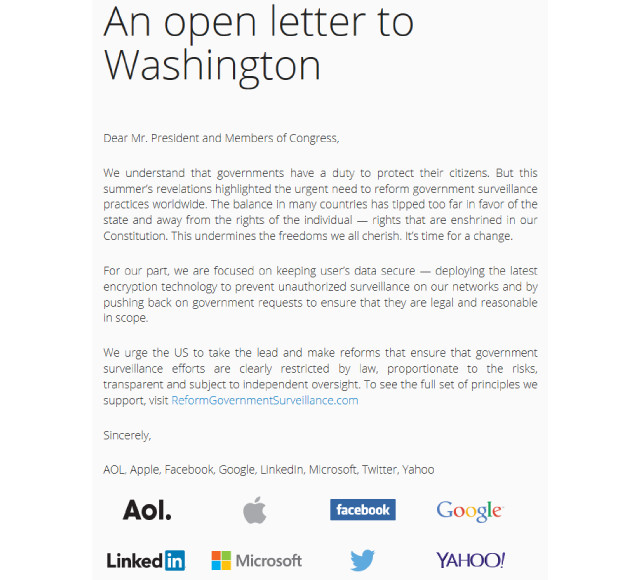 The letter says that "the balance in many countries has tipped too far in favor of the state and away from the rights of the individual... This undermines the freedoms we all cherish. It's time for a change." It also highlights efforts such as those recently announced by Microsoft, Yahoo and other companies to encrypt online services "to prevent unauthorized surveillance on our networks".

The letter concludes by urging lawmakers in the US "to take the lead and make reforms that ensure that government surveillance efforts are clearly restricted by law, proportionate to the risks, transparent and subject to independent oversight", and includes a link to a new cooperative website launched by the eight companies highlighting their campaign for change. 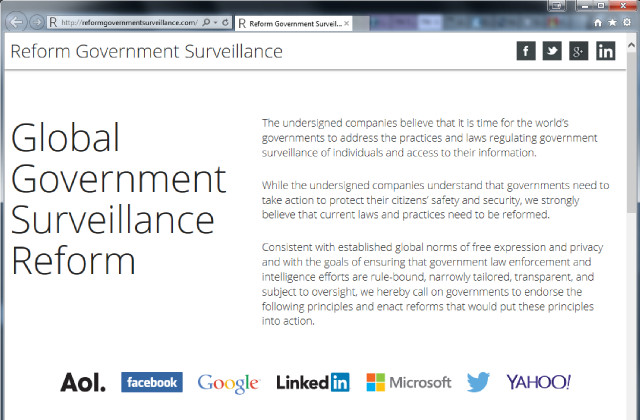 ReformGovernmentSurveillance.com outlines five principles, which the companies are calling on governments to "endorse and enact":

In a separate blog post on its own site, Microsoft's Brad Smith said that while the company believes "technology is a powerful tool that can help people... people won't use technology they don't trust. Governments have put this trust at risk, and governments need to help restore it."

Today's call for action by these companies is a significant step, but it remains to be seen whether their unified lobbying efforts will yield the results that they desire.