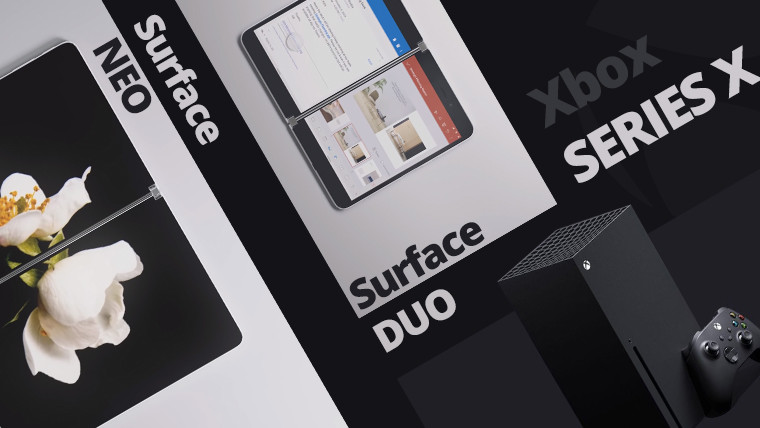 Microsoft had a big year this year in terms of new hardware. It introduced the Surface Pro 7 with Ice Lake processors and a USB Type-C port, the Surface Laptop 3 with a new 15-inch flavor, and the Surface Pro X, its first Windows 10 on ARM PC. While this year's devices are certainly exciting and meaningful improvements over their predecessors, next year's will be even better.

Microsoft has pre-announced more hardware for 2020 than it probably ever has in years past. And those are just the things that we know about. Let's have a look.

Yes, the next generation of the Xbox is coming in 2020. It will support 4K 60fps gaming, or up to 120fps, with support for Variable Refresh Rate. Moreover, it will support four generations of Xbox games, going all the way back to the original Xbox. And then, of course, we have games like Halo Infinite to look forward to.

At its October hardware event this year, Microsoft announced the Surface Neo, its dual-screen foldable PC. It runs a new version of Windows called Windows 10X, an OS that's made for foldable and dual-screen PCs. The Surface Neo has two nine-inch displays, and an attachable keyboard, making it easy to use as a laptop.

It's the long-awaited Surface phone, except it's running Android. Basically a smaller version of the Surface Neo but with a different OS, Microsoft has yet to tell us why we need a dual-screen foldable smartphone with Microsoft apps that anyone can get from the Google Play Store. But that's a story that the company will tell in 2020.

It includes features like Dynamic Rotation, and as seen in the picture above, you can tile them next to each other. The Surface Hub 2 itself has a modular design, so you'll be able to take out the 2S compute unit and replace it with the 2X compute unit.

The Surface Book 2 is over two years old now, and we're expecting the Book 3 at a spring hardware event. It's unclear why it didn't show up at this year's hardware event, especially if it's just a spec bump. Perhaps there will be more meaningful changes. After all, gen three is usually when a Surface product hits maturity.

The Surface Studio 2 is just over a year old, but this one actually shipped with out-of-date hardware. It's got a seventh-generation mobile CPU, while eighth-gen was out at the time. Like the Surface Book 2, it includes Nvidia GeForce 10xx GPUs, so that's another thing that could be refreshed.

Microsoft's Surface Go is almost a year and a half old, so if the company does plan to refresh it, it's time. It's a $399 device with a Pentium Gold processor, making it the only Surface that's not aimed at the premium market. Perhaps an ARM-based model might make sense for the next iteration, using Qualcomm's new Snapdragon 7c or 8c.

Microsoft has introduced a new Surface Pro in each of the last three years. The only problem with a Surface Pro 8 is that Intel doesn't have an 11th-generation U-series processor lined up, at least for the first half of the year. Microsoft did jump on top of Ice Lake early, so anything is possible.

What's also possible is that the Surface Pro 8 could be a redesign, similar to what happened with the Surface Pro 3. The Pro 3 had similar internals to the Pro 2, but it was bigger, thinner, and lighter. The existing Pro series is getting a bit long in the tooth, with large bezels and a design that's starting to feel dated, especially when sitting next to the new Surface Pro X.

Again, this is something that really depends on what Intel has planned. Intel is still going to be announcing additions to its 10th-generation lineup well into next summer, so I'm not sure what Microsoft could really do with the Surface Laptop in 2020. It's not going to be a redesign, since Microsoft put so much work into reengineering the product with the Laptop 3. The only real possibility is if Intel does put out an 11th-generation CPU next fall.

At Qualcomm's Snapdragon Technology Summit this year, the company announced the Snapdragon 7c and Snapdragon 8c, two new ARM chipsets that are aimed at entry-level and mainstream PCs. What was notably missing was a new Snapdragon 8cx. This year's Surface Pro X included a slightly modified version of the Snapdragon 8cx, called the Microsoft SQ1, so in other words, there's no new chipset to build the next iteration of the device on.

Naturally, that could change, as I don't expect Qualcomm to wait until next year's Tech Summit to introduce the Snapdragon 8cx vNext. But historically, we've had to wait at least six months from when a new chipset is announced to when devices show up. Right now, there have been three PCs announced with the Snapdragon 8cx, and the Surface Pro X is the only one you can buy. Samsung's Galaxy Book S is delayed, and Lenovo's Project Limitless is coming next year.

Did we miss anything? What do you think Microsoft will announce next year? Let us know in the comments!