A few weeks ago, Microsoft sprung a little surprise on us, when it launched its new My Xbox LIVE app for iOS devices, alongside the Xbox Companion app for Windows Phone. At the time, Windows Phone users consoled themselves with the knowledge that the iOS app was less comprehensively featured than the Mango version, and that the real meat of the Xbox experience – the games themselves – remained exclusive to the Windows Phone ecosystem.

However, a new job posting on the Microsoft Careers website, first spotted by LiveSide, appears to indicate that that might not be the case indefinitely. Calling for a developer to join the Xbox LIVE team, experience of iOS or Android development is cited as a bonus for candidates. While this in itself might simply point to development of the existing My Xbox LIVE app for those platforms, the rest of the job posting offers clues that there may be more to it than that. 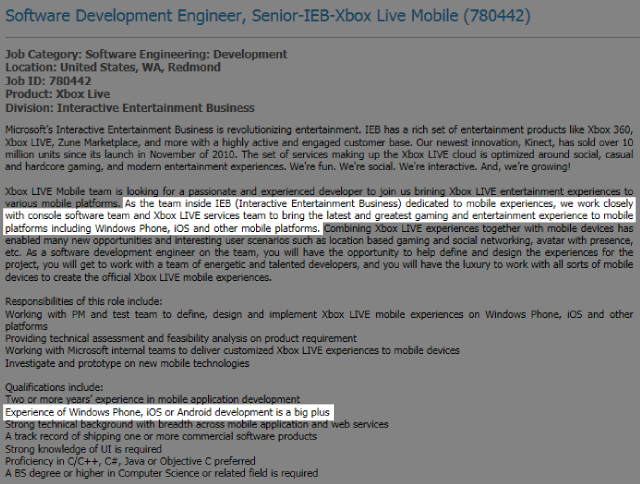 The posting clearly identifies the goal of bringing “the latest and greatest gaming and entertainment experience to mobile platforms including Windows Phone, iOS and other mobile platforms”, adding that the successful applicant “will have the opportunity to define and design the experiences for the project… and will have the luxury to work with all sorts of mobile devices to create the official Xbox LIVE mobile experiences”.

On the face of it, this certainly implies that Microsoft has plans to make Xbox LIVE gaming available on mobile platforms beyond just Windows Phone. If true, this would clearly remove a unique selling point of the Windows Phone platform. But before we overreact, it’s important to look at this in a broader context.

Back in October, we reported that Sony has been in discussions with Android device manufacturers for PlayStation Suite certification, which would see PlayStation gaming become available on a much broader range of phones and tablets than just the handful of Sony devices currently certified. The prospect of PlayStation becoming the de facto brand for mobile gaming – with a potential user base of hundreds of millions of Android handsets – may well be too much of a threat for Microsoft to ignore.

Should Microsoft maintain Xbox LIVE gaming exclusivity for Windows Phone, allowing Sony to establish itself as the king of mobile gaming with PlayStation in the Android ecosystem? Or should Microsoft be pragmatic, recognising that PlayStation gaming will only make Android stronger than ever, and that it still has to fight for mobile gaming supremacy, as well as trying to build up Windows Phone?

It’s a tough call – have your say, and let us know what you think Microsoft should do in the comments below.