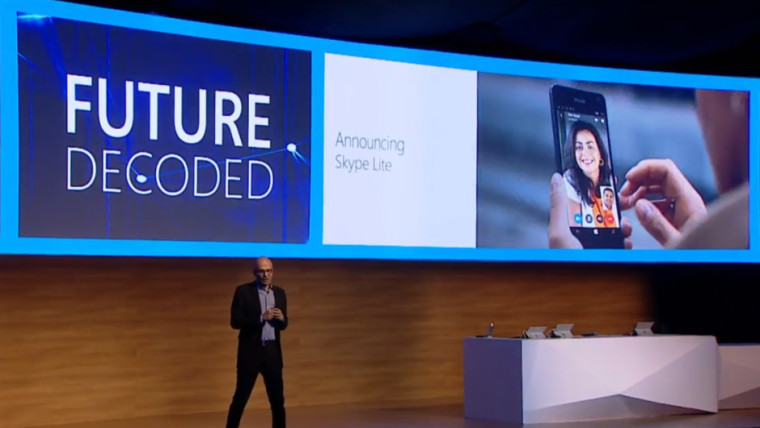 Today, at Microsoft's Future Decoded conference in India, the company's CEO, Satya Nadella, announced the launch of Skype Lite, "a client built for the connectivity speeds in India". The new app will have support for nine languages, and will include support for bots - a pillar of the company's development plans for its communication platform.

The app is just 13MB in size, and promises "battery-friendly" performance - especially important in places where access to power isn't always reliable. Significantly, the app is designed to run on 2G and "unstable network connections".

Saumya Chandra, Senior Program Manager for Microsoft's Digital India Team, said that Skype Lite "makes communicating with people simple by integrating all of your communication experiences into one app".

The new app is designed around four main tabs: Messages, Calling, Contacts, and Skype Bots. Chandra said that the company had tried to make it as simple and convenient as possible to use the app with a unified view that integrates both Skype and SMS text messages. The app also has a built-in feature to help "reduce SMS clutter" that uses machine learning capabilities.

Skype Lite offers a "reduced data usage mode" for video calls, but also includes a Data Manager feature to help users keep track of how much data they're consuming through the app - and given that the Bots can give access to a wide range of multimedia content, that data usage could quickly escalate if left unchecked.

Skype Lite will also include integrated support for Aadhaar, a digital identity verification system operated by India's government. "Every Indian citizen should be empowered with their own data, so that they can be data-rich," he said. "And that journey doesn't begin if the identity system of the services that you use is not controlled, not in the service of the Indian citizen."

Nadella said that it is Microsoft's "responsibility as a multinational company to operate in India responsibly by making sure that our services support the India stack, and that's what we're doing with Skype." He added that Aadhaar is "going to be the fundamental identity system of the messaging client that is going to be available in India for every Indian citizen." 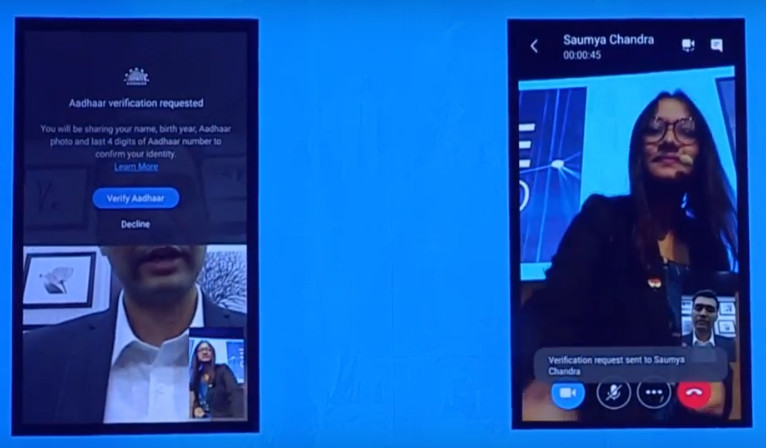 During a demo video call, Rahul Malegaonkar, a Senior Software Engineer for Skype, explained one aspect of the value of Aadhaar integration into Skype Lite:

In this ever-changing economy, everybody is looking forward to move fast with their professional projects, and Skype Lite can help with that most important scenario - the job interview.

If I want to hire someone quickly, I would feel more comfortable interviewing the candidate knowing that I am indeed talking to the right person. With Skype Lite, not only can I establish a video call, but also verify the identity of the candidate in the same call within seconds using Aadhaar.

With the push of a button, the other person on the call can receive an 'Aadhaar verification request', which states: "You will be sharing your name, birth year, Aadhaar photo and last 4 digits of Aadhaar number to confirm your identity." If the person chooses to share that information, at the end of the call, all of the Aadhaar ID data is completely erased from the recipient's device.

Nadella said that Microsoft is very excited about innovations such as Skype Lite and Kaizala - another mobile app developed initially for, and extensively used in, India - because, he explained, "it is born from this fundamental insight we gain by observing how digital work is transforming in India."

That also links with Microsoft's "listen and learn" approach to its efforts across Africa, a key theme of its recent NexTech conference in Nairobi, Kenya. At that event, Microsoft's Dona Sarkar, chief of the Windows Insider Program, said that the company has made a fundamental change in its development processes, making a much greater effort to understand the needs of its users in emerging markets. As Dona explained in an interview with Neowin at that event, the company has even built a 2G network on its campus in Redmond, Washington, so that products can be tested in these low-speed scenarios.

Skype Lite is available to download today from the Google Play store. Microsoft hasn't yet announced plans to release it on Windows phones, but the slide for the company's announcement today did show the app running on a Microsoft Lumia handset.