Lots of people are going to be getting their new Xbox One consoles at midnight later today in their respective time zones. While some folks will do the sensible thing and go right to bed after bringing the console home so they can play over the weekend, others will want to immediately plug in their Xbox One to their big screen TV and start playing games.

If the latter scenario happens to you, it's likely that you will not feel like going to work on Friday morning. In that case, Microsoft has a funny way to stay home with this "Doctor's Note" they have published. 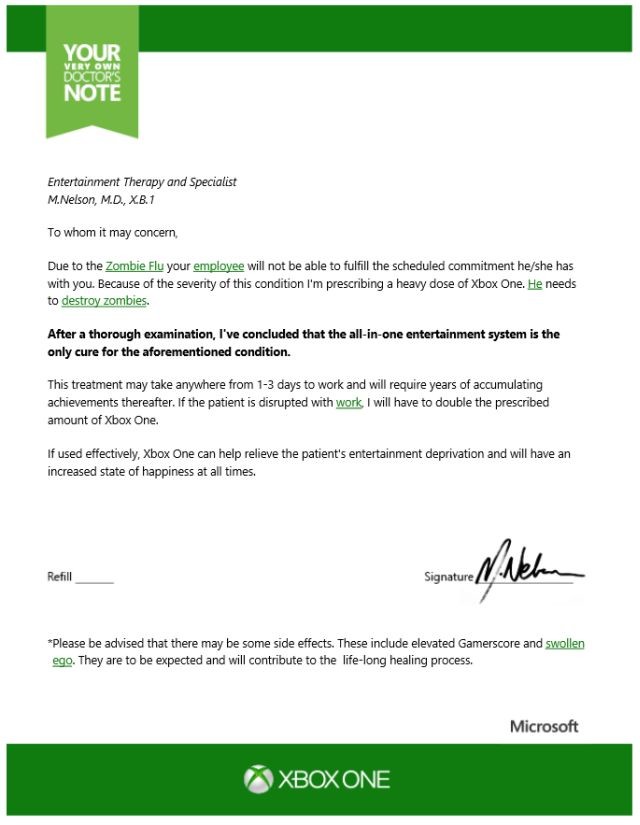 The site includes a number of ways to customize the note; for example, you could have your "doctor" say you have contracted "Racecar Virus" or "Roman Rage" and that you have to "demolish buildings" or "shoot some hoops" to be cured.

We would be interested to know if anyone actually uses this note to get out of work on Friday. We already know that Bill Gates has told his own kids that they won't be allowed to go out at midnight tonight to get their own Xbox One consoles, but we also suspect that they might get one for free from their dad; he does know some people at Microsoft.