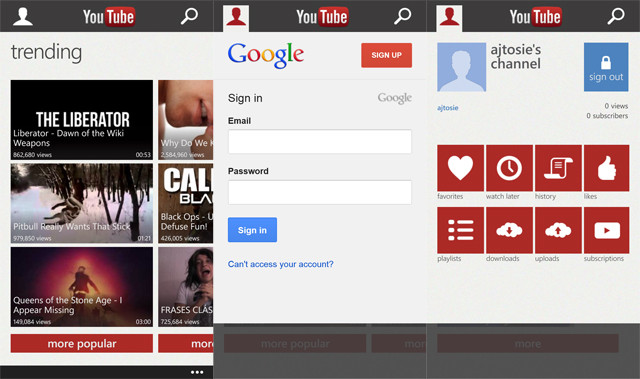 Microsoft released a complete overhaul of its YouTube app for Windows Phone 8 this morning.

Microsoft released a complete overhaul of its YouTube app for Windows Phone 8 this morning, providing users of the company's smartphone operating system with a free app for the video-sharing service that includes all its most popular features.

The new app, which may not be immediately available for all users as it was just published, allows users to manage their profiles and playlists, share videos to social networks via text or email, and limit content to children with YouTube's Safety Mode feature. Additionally, Windows Phone 8-specific features such as the ability to pin videos, playlists, channels and search queries are included in the updated app.

Microsoft's earlier YouTube "app," which in reality was little more than a skin of the service's mobile website, lacked the majority of features found in third-party alternatives such as MetroTube. The company previously complained to the European Union and U.S. Federal Trade Commission that Google, owner of YouTube, has purposefully blocked access to its full range of YouTube application programming interfaces, preventing Microsoft from developing a quality Windows Phone app.

When reached for comment, a Microsoft spokesman provided Neowin with the following statement regarding the app's development: "Windows Phone invested additional engineering resources against existing APIs to re-architect a Windows Phone app that delivers a great YouTube experience, including support for unique Windows Phone 8 features such as Live Tiles and Kids Corner. Microsoft did not receive any additional technical support to create the Windows Phone YouTube app."

Though the new YouTube app is not yet available for Windows Phone 7.5, Microsoft said an updated version should be available in the coming weeks.