The preview versions can be downloaded from Microsoft's website. In a blog post, Brad Anderson, the Corporate Vice President of Windows Server and System Center at Microsoft, stated, "These products are going to have a massive impact on companies around the world – and IT pros are going to see the traditional boundaries between datacenters vanish and a true hybrid cloud emerge."

In particular, Sanderson said that SQL Server 2014 has a number of new features including "new hybrid scenarios like AlwaysOn availability, cloud backup and disaster recovery." System Center 2012 R2 will combine with the upcoming new version of Windows Intune to help IT workers manage all devices in a business. 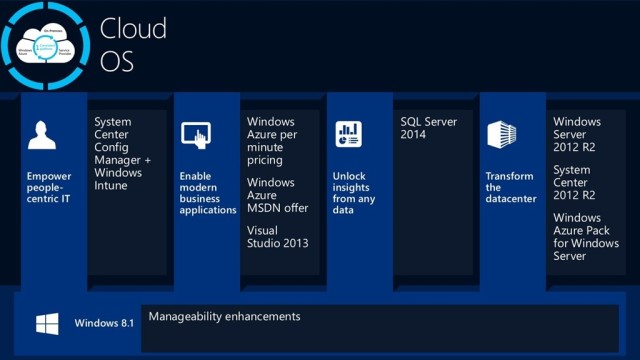 Anderson also posted up a slide from his TechEd Europe keynote speech which shows how Windows Server 2012 R2,  System Center 2012 R2, SQL Server 2014, Windows Azure and more work together to help IT employees create what Microsoft calls the Cloud OS. He adds:

The Microsoft Cloud OS challenges other cloud providers to justify their high costs, time consuming upkeep and expensive maintenance fees. When you consider that Microsoft alone can provide platform, management and productivity tools – it’s a very exciting proposition for companies around the world.

These releases are leading up to the official public preview launch of Windows 8.1 for Windows 8 and RT that will be released on Wednesday.