Microsoft announced Windows Template Studio back in May 2017, making it easier for developers to build high quality Universal Windows Platform (UWP) apps. Over the past few months, the open source tool has been updated numerous times with tons of new features and improvements being added.

Following the release of version 1.7 back in February 2018, Microsoft has now rolled out version 2.0 of the tool. 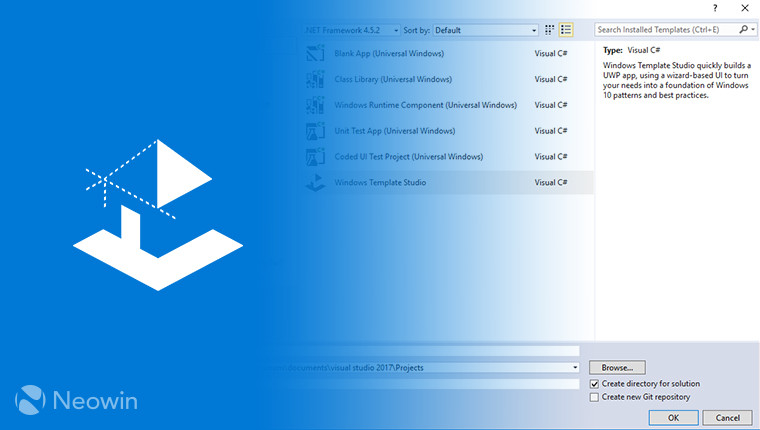 While the update doesn't pack too many major features, it does pack some nifty ones. The interface has been improved by collaborating with the Visual Studio team so that it's faster and accessible to all developers. The template updating experience has also been enhanced, and the wizard now detects light, dark, and high contrast modes of Visual Studio too.

In addition, once the next update to Windows 10 is released, we’ll adopt the platform NavigationView control over the UWP Community Toolkit’s great Hamburger menu control, which already does do a smart flip between their classic and the platform control. We’re currently working on documentation to aid in that transition between the existing control and the new platform control as well.

Furthermore, documentation regarding templates and the Windows Template Studio wizard will be transitioned to docs.microsoft.com.

If you've already installed Windows Template Studio, Visual Studio should automatically update the extension, but you can also navigate to Tools > Extensions and Updates > Update if it hasn't. If you haven't installed the extension, you can head over here to do so. Microsoft has encouraged users to submit feedback via GitHub.