In May 2012, Google announced it would be adding a new page on its Transparency Report site called Copyright Removal Request, where every month it would show how many requests it has received to remove URLs from its search results due to alleged copyright violations. As it turns out, that same page shows that content owned Microsoft is one of the biggest sources of those URL requests. In just the past month, the report shows that Google has been asked to remove 864,768 web pages from its search results due to those pages reportedly violating copyrights secured by Microsoft. 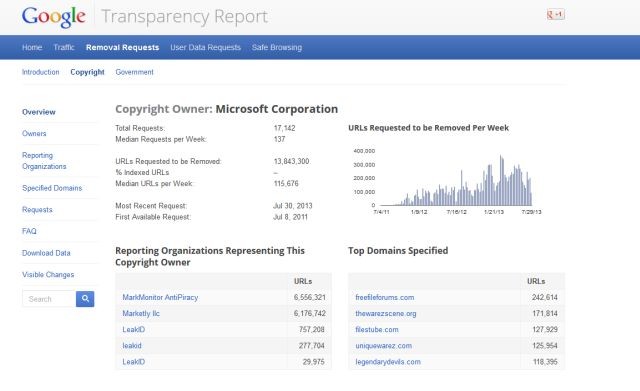 However, it appears that mistakes are sometimes made in this request process. TorrentFreak reports that RealID, acting on behalf of Microsoft, sent Google a takedown requests for six URLs, claiming they were infringing on Microsoft's content. The thing is, those six pages were in fact hosted on Microsoft.com itself. Five of the six pages are French language pages, including one to the Microsoft Store site.

The story claims that Google figured out that the request was a mistake on RealID's part and did not remove those pages. It's likely that RealID used some kind of automated system to find web pages that is supposed to detect copyright infringement on those sites. Hopefully this odd error will be a lesson to both RealID and Microsoft to check on what they are submitting to Google before they send a formal removal request.