When you surf over to any website, the chances are good that you will encounter banner or display ads that serve not to attract you to to click on the ad but rather to turn you off from the product or service they are trying to sell you. In fact, according to a new paper co-authored by members of Microsoft Research, really annoying banner ads might prevent some people from going back to the website that displayed them in the first place.

The Microsoft Research blog has a summary of the paper, The Cost of Annoying Ads, that was co-written by Dan Goldstein and Siddharth Suri of Microsoft Research New York City, alongside Preston McAfee of Google. Part of the research involved a study of people who were asked to give their opinions on a series of real banner ads. 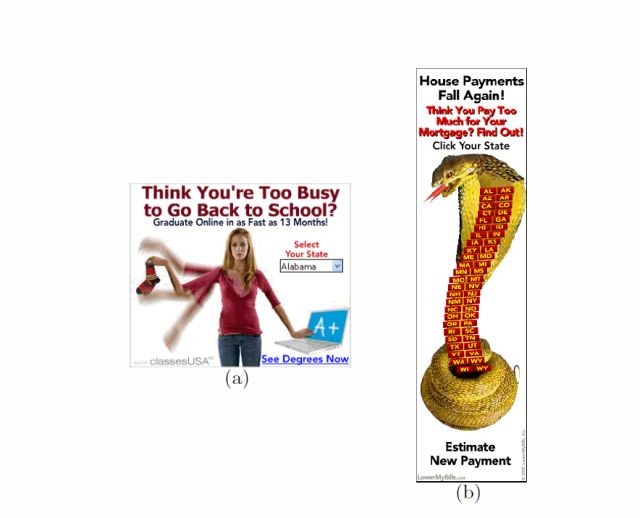 Here's a shocker: The ads above are considered annoying by most people, especially if they are animated.

It's not a surprise to learn that the ads that most annoyed the people who took part in the survey had a lot of odd animations and movement. The paper's authors state, "Complaints about movement or animation and how they distract from the content show there is a cost to users and publishers." Ads that look cheap or appear to be a scam were also not ranked highly, as were banner ads that contained graphics that did not relate to the product or service, " ... such as a dancing wizard in an ad for online classes."

But do showing these ads actually cost website operators money in the long run? The authors used Amazon's Mechanical Turk online labor market to select users who would be asked to categorize emails for a per-message fee. Microsoft stated:

Participants, who were free to quit at any time, were assigned to one of three different pay rates and were asked to categorize emails as “spam” or “not spam” in the presence of no ads, annoying ads, or innocuous ads.

The basic idea was for the researchers to find out how much money the participants would make if they saw emails with annoying ads compared to those who saw none and those who saw ads that were not annoying. Microsoft stated, "In the experiment, the authors found that they needed to pay people more than a dollar per thousand impressions to make up for the lost traffic caused by annoying ads, compared with showing innocuous ads or no ads at all."

This kind of research could lead to better ways of both creating banner ads as well as pricing those ads. However, we suspect that weird animations in display ads may be around the Internet for some time to come.