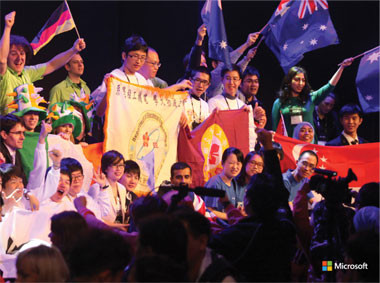 Microsoft's 11th annual Imagine Cup competition is once again inspiring students from around the world to create apps and products that have new technology ideas and innovations. Today, Microsoft announced the list of the 86 teams that will compete in the 2013 Imagine Cup Worldwide Finals.

Microsoft's press release states that a total of 305 students, representing 69 countries, will take part in the finals, which will be held in St. Petersburg, Russia from July 8-11. Microsoft said that a record number of students competed in the preliminary stages of the Imagine Cup worldwide, with an over 70 percent increase compared to 2012.

$300,000 will be given out to teams who win in various categories in the Worldwide Finals. A list of the judges for the event has been posted, which includes Alexey Pajitnov, the creator of Tetris, Microsoft's director of Xbox Live programming Larry Hryb, and Simon Lu, the director of platform operations and strategy for Twitter. Doctor Who himself, actor Matt Smith, will be the host of the Imagine Cup finals ceremony on July 11th, which will be streamed live on the Internet.

The full list of teams, along with the catagories they will be competing in during the Imagine Cup finals, are posted on the competition's official web site.