Microsoft's cross-platform software strategy has seen the company roll out all sorts of new apps for iOS and Android in recent months. Only last week, details emerged of Microsoft's new phone Dialer app for Google's mobile OS, which followed on from its release on Android of 'Send', an app that aims to combine the best of email and instant messaging.

Microsoft's experimental Garage development team has now rolled out its latest app for Android: 'Parchi', which it describes as "a quick and light-weight note taking app". 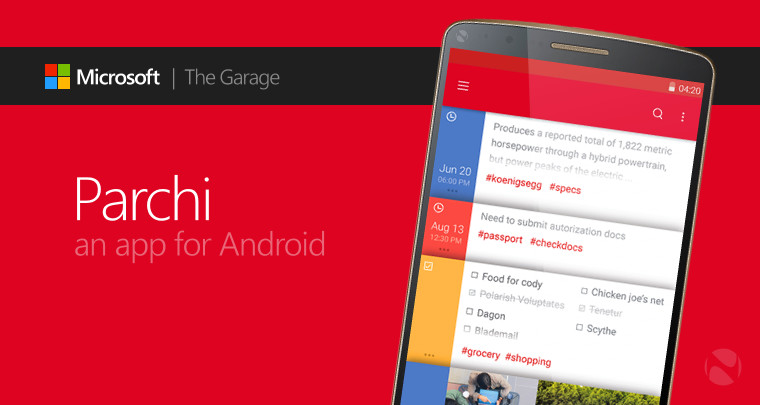 Of course, Microsoft already has note-taking software - indeed, OneNote is among the world's most popular apps of this type. But the vision for Parchi is a little more focused than the 'catch-all' note-taking solution offered by OneNote; indeed, there's a clue in the name - as the company explains, "parchi is a Hindi word that refers to small pieces of paper for taking quick/short notes".

Microsoft says that notes taken in Parchi are "small, quick and non-complicated - without unlocking your phone, just type or take a picture of what you want to save and you are done". There are a few basic features to make it easier to file your notes too, including tagging, reminders and color settings - and you can even pin a list to your lock screen.

On the Microsoft Garage site, the team behind the app briefly discussed its development:

When building Parchi we had three main goals - the app had to be quick, it had to be super easy to use and it had to adapt to the user. And so started the 5 month journey! We've learnt a lot from our early users - what we got right in the first try (taking notes from a lock-screen) and what needed improvements (adding structure to the unstructured notes).

You can download the app via the Google Play store. One little detail worth noting: the store URL refers to the app as 'Microsoft Bites', so it appears that there was a name change at some point in its development. This is similar to the Google Play URL for Microsoft Send, which - as Neowin exclusively revealed earlier this year - was originally known as 'Flow'.