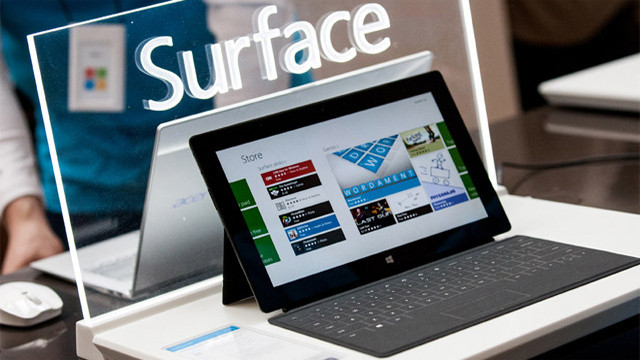 When the Surface RT launched on Oct. 26, there was commentary that Microsoft was missing out on a major opportunity by not releasing a smaller-sized tablet as competitors Apple, Google and Amazon had done around the same time. Microsoft may be working to remedy that complaint, however, according to a new report.

The Wall Street Journal reports Microsoft is working on a 7-inch tablet, citing unnamed sources. According to the report, the move was made in reaction to the market shift, as consumers have rapidly adopted smaller-screened tablets from Microsoft's aforementioned competitors. If the report is accurate, the tablet would enter mass production later this year, possibly hinting at an announcement in advance of the holiday season.

Last year, shortly after the launch of the Surface RT, a report claimed Microsoft is working on a 7-inch gaming tablet called "Xbox Surface," though that device may be separate from the tablet The Wall Street Journal is referring to. Leaked specifications that accompanied the report indicated the device would use a custom ARM processor and 5GB of high-bandwidth DDR3 RAM, which would be an improvement on the strategy used with Surface RT, as that tablet launched with a dated Tegra 3 ARM chip.

The report also claimed the tablet would run a custom version of the Windows kernel that would feature an interface emphasizing entertainment services such as games, music, movies and television shows. While the Xbox Surface is said to support certain standard tablet functions such as email, they reportedly took a back seat to Microsoft's expanding entertainment services.

No additional information has since been released about the Xbox Surface, however, as Microsoft is rumored to have built its own factory to build Surface tablets, possibly in an effort to halt information about new devices from leaking to the press.

Microsoft is widely believed to be hosting an event to reveal the next-generation Xbox gaming console on May 21. That event is also said to include the announcement of a new, $99 version of the Xbox 360. It's unclear if any potential Xbox Surface tablet announcement would take place at the same time or a later date, however.