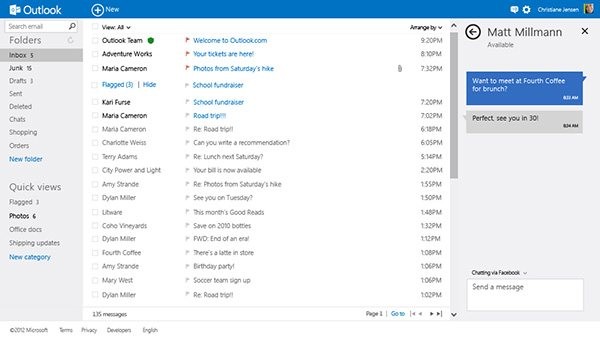 On Friday, we reported that as part of its "winter cleaning," Google announced it would no longer support adding new devices for the Exchange Active Sync protocol for accessing Gmail, Calendar and Contacts after January 30. At the time, Google said, "With the recent launch of CardDAV, Google now offers similar access via IMAP, CalDAV and CardDAV, making it possible to build a seamless sync experience using open protocols."

This means that people who use a number of Microsoft products, including Windows 8 and Windows Phone 8, may not be able to access Gmail with new devices after the cut-off date. In a new post on the official Outlook.com blog, Microsoft said they were "very surprised" at Google's decision.

It means that many people currently using Gmail for free are facing a situation where they might have to degrade their mobile email experience by downgrading to an older protocol that doesn't sync your calendar or contacts, doesn't give you direct push of new email messages and doesn't have all the benefits of Exchange ActiveSync.

Microsoft once again pointed out that its own Outlook.com email service does support EAS and tried to show that it has its own advantages. Microsoft has yet to announce if it will have any workaround solutions of its own for Windows 8 and Windows Phone 8 who still want to use Gmail.