Today's long awaited Office on iPad announcement will likely be welcomed by the tens of millions of owners of Apple's tablets who wanted a full version of Microsoft's office apps. However, the ability to create and edit documents on those apps requires an Office 365 subscription. 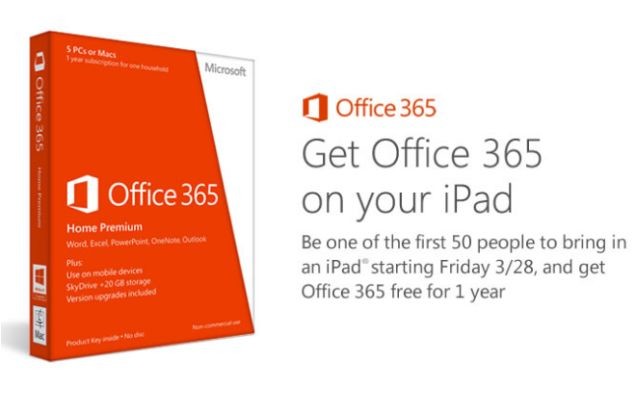 Today, the Microsoft Store website revealed a new promotion designed to get iPad owners to come into their retail store locations. Starting on Friday, the first 50 people who bring in their iPad to each Microsoft Store location will get Office 365 Home Premium for one year for free. Normally, that subscription costs $99.99 a year.

The Home Premium version allows one user to install Office programs on up to five Windows and Mac PCs, along with up to five tablets. If a household has more than one iPad, this would be a huge help in getting them to use Office apps and having them work with their PC and Mac counterparts.

By the way, the upcoming Office 365 Personal subscription, which will cost $69.99 a year, will also allow for one tablet, including an iPad, to use Office apps, along with one Windows/Mac PC. It will become available later this spring.