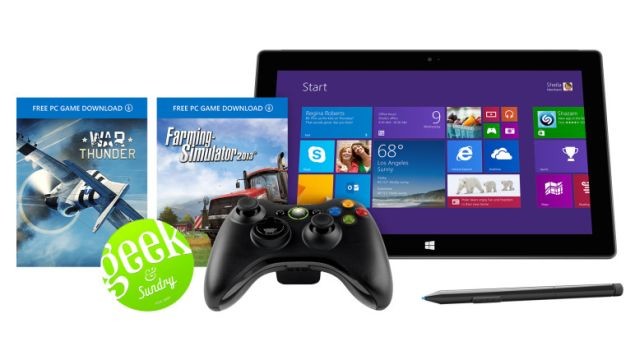 While we keep waiting for Microsoft to release an Xbox gaming version of its Surface tablets, the company is now offering a way to buy a new Surface Pro 2 with a free controller and two games. The special promotion is now running exclusively on the Microsoft Store website.

The special gaming themed bundle, which lasts until May 1st or while supplies last, gives buyers a way to get a free Xbox 360 Wireless Controller for Windows when they buy any version of the Surface Pro 2. The bundle also comes with codes for two free games. One is Farming Simulator 2013, where players get to live out their virtual dreams of maintaining a farm. The other is a premium pack for the free-to-play WWII warplane themed online game War Thunder. Combined, the controller and the free games normally would cost $104. The deal is only available in the U.S and Canada.

The special bundle is being offered as a tie-in to Unplugged, a new gaming themed YouTube series that comes from the popular Geek & Sundry channel. Microsoft is sponsoring the series which features players battling each other in League of Legends while using a Surface Pro 2.