While Microsoft continues to keep quiet about its plans for the next Xbox game console, the rumors continue to fly that the hardware will include a feature that will require the console have an "always on" Internet connection to play games and use its apps. On Thursday, a creative director at Microsoft Studios took to his Twitter account to offer his personal opinion on the subject, and it's a stance that's not proving to be a popular one.

Adam Orth, who joined Microsoft Studios in 2012 after previously working at PopCap Games and LucasArts, posted the following message on his Twitter account Thursday. 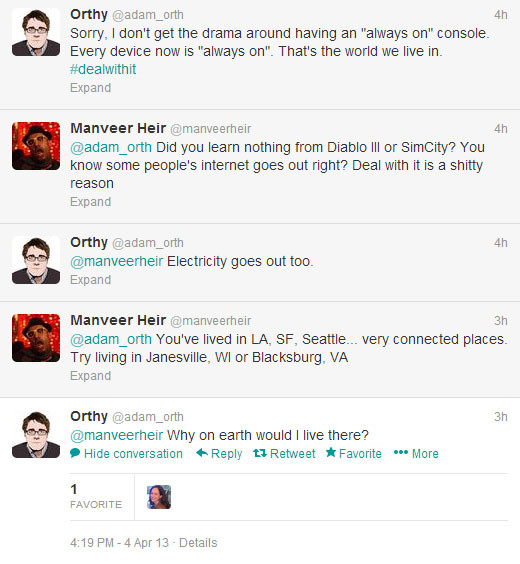 While Orth has since protected his Twitter account, a forum poster at NeoGAF collected his messages on the subject, which included his exchange with BioWare game designer Manveer Heir. As you can see, Heir points out that solid Internet connections are not universal in the U.S., but Orth seems to brush aside that argument, basically saying that people who live in those parts of the country should not live there.

It's important to point out that Orth was expressing his personal opinion on the "always on" debate and his views should not be construed as an official stance from Microsoft itself. However, the fact that his statements have been slammed universally by gamers in lots of message boards and news comments should give Microsoft some indication on how gamers feel about this feature possibly being put into the next Xbox.