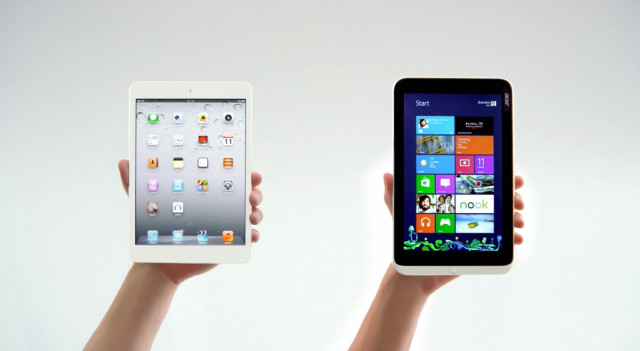 Microsoft has released another advertisement that takes a stab at the tablets from Cupertino. Yesterday, the company released a new spot that showed why the Surface RT was superior to the iPad 4 and today we have the iPad Mini going up against the Acer Iconia W3.

The commercial, like all of the ones before it, highlights the shortcomings of iOS and how the Windows equivalent bests the device in nearly every way, including price.

While it is great to see Microsoft going after all of Apple’s tablets, the choice to highlight the Acer Iconia W3 tablet may have been a poor representation as reviews of the tablet have been anything but pleasant; most of the complaints revolve around the awful display.

Sure, it’s great that the device is priced well below that of the iPad Mini but Microsoft may have been better off waiting a bit to highlight a tablet that is worthy to compete against the iPad Mini because if a consumer goes to compare these two devices side-by-side, the iPad Mini, while offering fewer software features, does best the W3 in terms being an all-around better device.

In fact, when the device first came out, Neowin got it’s hands all over the W3 and had this to say about the device:

Frankly, the W3 hasn't made a particularly positive impression here. The need to pursue affordability is certainly understandable, but given how much Apple has been able to achieve in the lighter, similarly-priced iPad mini, we're not sure whether Acer has enough to make a strong case for the W3 here.

We expect that Microsoft will likely target the iPad Mini in the future with other tablets as well, likely the upcoming Surface Mini, and this will only be the first of many to bash the small tablet. But, if consumers do head for the W3 and that’s their first experience with Windows 8, it may leave a bad impression.