If you own a Nokia Lumia smartphone that uses Windows Phone 8 (and based on recent sales numbers, that could be more than a few of you), there's a new feature that is available via download that could make your overall voice and texting experience much better. 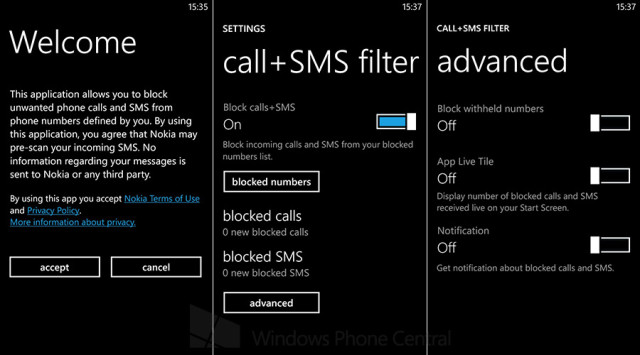 WPCentral.com reports that a new update to the Nokia exclusive Extras + Info app for Windows Phone 8 adds a new setting to all Lumia Windows Phone 8 devices called Call + SMS Filter. Yes, that new setting means Lumia owners will now be able to block any unwanted numbers from calling and texting them.

The new feature makes uses of the APIs that Microsoft put into the recently released Windows Phone 8 GDR2 update. In addition to giving Lumia owners the option to block calls and texts, it also lets them set up a Live Tile on their Start screen that shows exactly how many calls and SMS have been blocked without having to go into the app's settings. However, if you block a number, you block both calls and text messages; there is no current way to block calls but allow for texts to get through and vice versa.