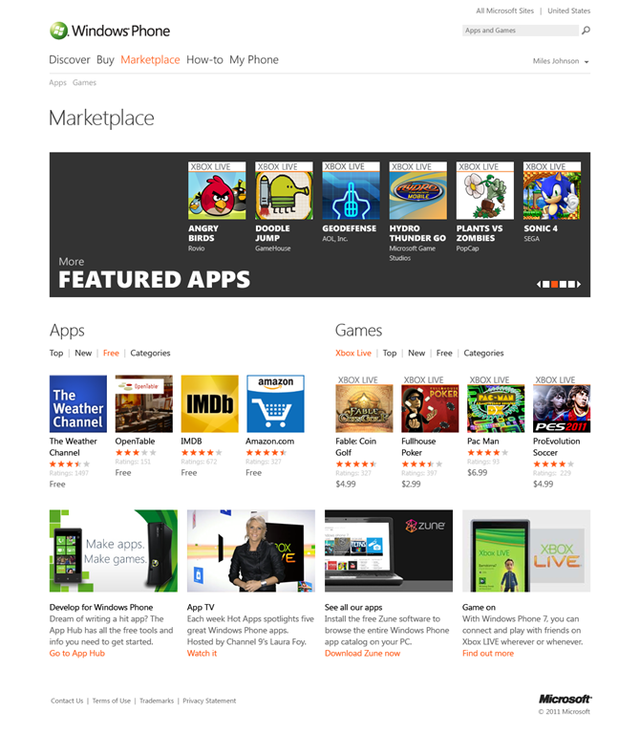 There are many new features coming to the Windows Phone platform when the 'Mango' update is deployed later this year. Along with all of the new features, Microsoft has also announced that there will now be a Web version of Marketplace for Windows Phone users.

The Web version of Marketplace will launch with the new OS later this year and give customers another vehicle for discovering your great apps and games. And as a Windows Phone developer, you get all of the added visibility with no extra work.  Just as on the phone, customers will be able to browse the full catalog, view screenshots, read application details and reviews and choose from all of the supported languages for that app. This offers customers another way to more thoroughly and confidently browse your apps from the comfort of their PC’s web browser. With the Web version of Marketplace, we will also have more placement areas in which to provide featured apps with extra visibility and merchandising possibilities.

This enhancement continues to show Microsoft's intent on making Windows Phone the most robust experience possible. They are leaving no stone unturned and are actively listening to consumer feedback for implementations into the platform.

For Windows Phone fans, the platform is quickly becoming more competitive as Microsoft looks to retake the market. While Windows Mobile was left to die a slow death, Microsoft is actively working to make WP7 the best all around experience on the market.