If you are an Xbox Live user and you wish to file a complaint about what another user has done on the online gaming service, Microsoft will now be sending you messages back if they happen to take any action on your issue. 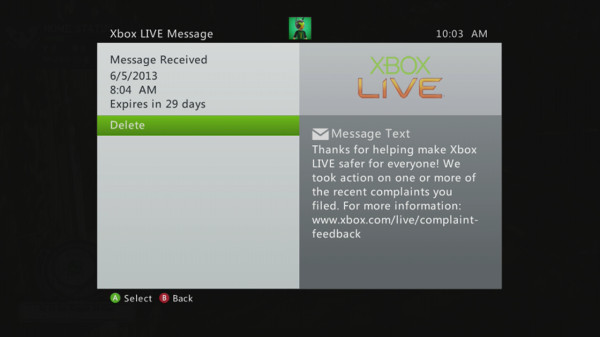 Polygon reports that Microsoft quietly started this new practice on Xbox Live earlier this year. In a statement, Microsoft said:

When a member files a complaint against another player, the complaint feedback feature will notify select complainants that one or more of their complaints have resulted in enforcement action. Members will be notified via in-dash messaging and may view additional information at Xbox.com/live/complaint-feedback.

For example, Xbox Live users may feel they are being bullied or harassed by other members while they are online playing a game. If Microsoft examines the evidence against that user and finds any cause for concern, they can take a number of actions, ranging from barring any communication in online games to Xbox Live account suspensions, all the way up to physical Xbox 360 console bans.

Microsoft may also remove points from an Xbox Live account holder's Gamerscore if they receive complaints they have tried to cheat to unlock achievements. Microsoft said that adding feedback to complaint reports "is one feature in several near- and long-term product and service enhancements that we have in the works."