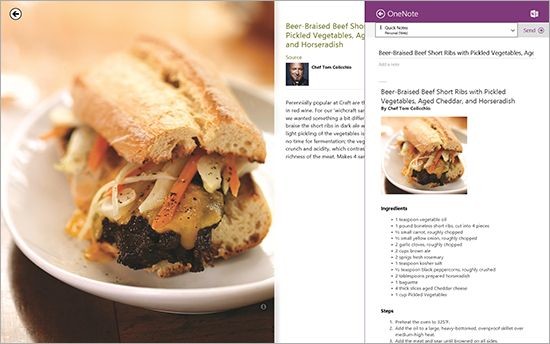 Currently, Microsoft's only Office application that's available as a full Modern UI app is OneNote. Microsoft last updated the app for Windows 8 in July and today, the company released a new version that adds quite a few new and useful features.

As described on the Office blog, the new OneNote app takes advantage of some of the new features that have been put into the recent Windows 8.1 upgrade. One of them allows anything shown on a screen to be captured and shared on the OneNote app by bringing up the Share charm, selecting OneNote from the menu and then press or click on Share.

The new Camera Scan feature allows the OneNote app to not only scan and capture documents via a device's onboard camera, but Microsoft says it can also "automatically crop, rotate, straighten, remove shadows and sharpen the image". The Optical Character Recognition feature, which Microsoft recently added to SkyDrive, can assist with searching for words inside those scanned documents in OneNote.

OneNote for Windows 8.1 can also show any recent notes made with the app in the order in which they were taken, along with previews that allow users to see those notes without the need to view the entire page if that's not necessary. There's been some improvements in making notes via a stylus and a way to view notes in Full screen mode. You can download the app now from the Windows Store.