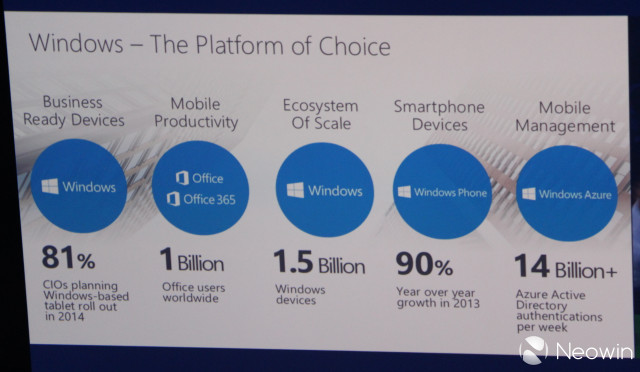 Microsoft has a massive ecosystem of devices around the world and at its Windows Partner keynote, Tony Prophet, stated that the company has 1.5 billion devices running Windows around the world. That figure is representative of all Windows devices including desktop PCs and Windows Phones.

Microsoft loves to tout these numbers for many reasons. One is that they are still working to actively court developers to the Windows app stores and by showing the footprint of Windows, it makes the platform more enticing to partners of all sizes. Of course, not all of those Windows users have access to the stores as Windows 7 still has a massive footprint inside that 1.5 billion figure.

Another interesting figure is that 81% of CIOs are looking to roll-out a Windows based tablet in 2014; this represents a large opportunity for Microsoft and its OEMs to sell Windows tablets in 2014.

Microsoft keeps pushing the notion that Windows is still growing and that everything from Windows Phone to desktop PCs still represent a viable market for the company's partners and its own bottom line.

Further, Microsoft is not shy that they are lowering the barrier to entry to Windows devices by cutting the costs of licensing Windows that will allow for cheaper devices - including both tablets and laptops - available in the very near future.