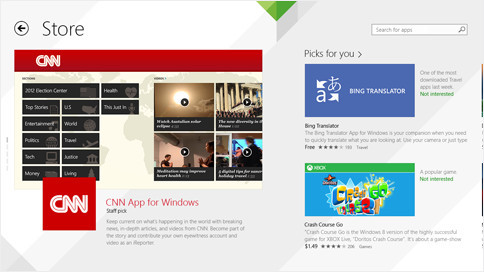 The launch of Windows 8.1 in October also saw the arrival of a new version of the Windows Store, with a revamped UI designed to offer more assistance in finding and downloading Modern UI apps. Now a new report, based on internal data that Microsoft sent to app developers, shows a large growth in the number of Windows Store app downloads in October.

TechCrunch reports that, according to Microsoft's numbers, the Windows Store generated an average of 1.7 million app downloads per day in October. Those numbers are up 38.56 percent compared to June. Overall, 51,152,284 apps were downloaded from the store in October. The vast majority were free apps (49,796,691) while only a fraction were paid apps (1,355,593).

It's likely that the release of Windows 8.1 in October, along with an increase in apps available for the platform - including the official Facebook app - helped to boost those download numbers last month. It remains to be seen if those growth rates can continue.

The Metro Store Scanner website, which keeps an unofficial track of all of the Windows 8/8.1 apps that have been published by Microsoft, currently shows there are 125,856 apps in the Windows Store worldwide. The store passed the 100,000 app milestone on July 1st, seven months after the launch of Windows 8.