A few weeks ago, Microsoft announced that they would be cleaning up their app store and removing content that did not meet their criteria for quality. If you have ever used Microsoft's app store, you will know that it was filled with junk that polluted searches, and some apps tried to deceive users by having them pay for otherwise free services.

But it looks like Microsoft's pruning may be doing a bit of harm as well as good. We have been contacted by two developers who have said that their apps have been removed from the store after Microsoft said that they did not meet their guidelines for being a quality application. In both cases, the apps had an average rating around 4 stars with more than 10k downloads and 100+ ratings.

One developer has asked to remain anonymous for fear of repercussions from Microsoft towards his other apps but Brandon, creator of the 'Upload to YouTube' app has had his application pulled down after the company said "the app does not offer customers unique content, differentiated creative value or utility".

Anyone who has used Windows Phone will tell you that they long for a proper YouTube app from Google but the company has refused to build apps for Microsoft's ecosystem which means it's up to third-parties, like Brandon, to fill in the void. His app, which he claims is the first and only app to allow you to upload videos to YouTube from your camera roll, has racked up over 32k downloads and with a 3.9/5 rating after 232 reviews, it's far from a spammy app.

Microsoft's argument that the app does not offer any utility is a bit obtuse as the app, which does a single, simple purpose elegantly, certainly has a place in the store as Google has refused to fill the gap. 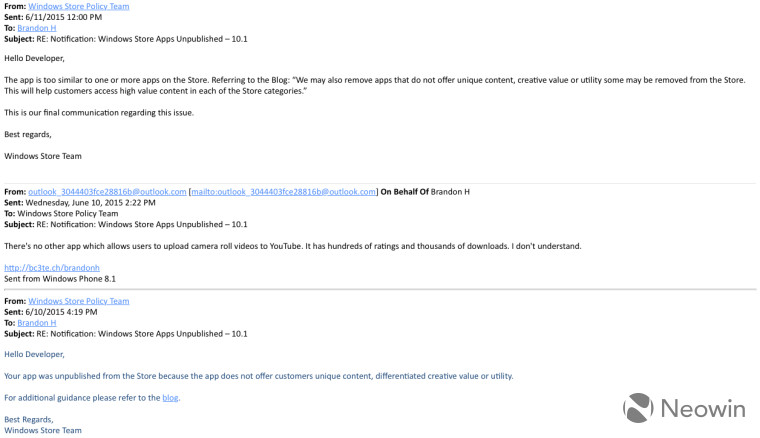 According to the email, shown above, Microsoft is playing hardball when it comes to the removal of these apps and is cutting off communication as well.

The reasons Microsoft is cleaning out its app store is that after Windows 8 launched, the company wanted to boost its numbers and was letting just about any code that would compile into its store. The result is a software marketplace filled with a bunch of junk that only serves as a distraction.

With Windows 10 arriving next month, Microsoft is expecting a new wave of apps to be submitted as the company aggressively moves towards its goal of having one billion devices in the next three years. Because of this, they expect new apps to arrive to target these new users which means now is the time to clean out the old inventory before it becomes overwhelmed with new apps.

[Update] Good news! The app is back, although it was likely helped by the exposure from the press, we do wonder how many other apps are being taken down by over-zealous moderators.

.. i am *extremely* happy to report that the @windowsstore team has reinstated #uploadtoyoutube (or plans to). 5/ pic.twitter.com/1Wdh3uZqG9