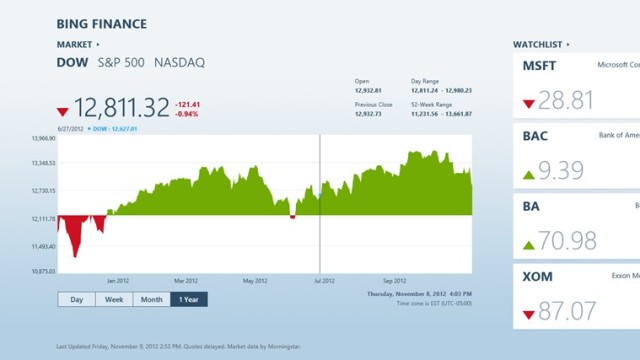 For the launch of Windows 8 and Windows RT, Microsoft recruited its Bing apps team to create "Modern" UI apps that would be pre-loaded for both operating systems. The result were the News, Weather, Finance, Sports, Travel and Map apps that are among the first things a Windows 8 owners tends to access when they use Windows 8 or RT for the first time.

Several Bing apps recently received automatic upgrades with some new features and improvements, and it sound like we can expect even more in-house apps to be released for Windows 8. ZDNet.com reports that, during a chat with Brran MacDonald, the Corporate Vice President of Microsoft's Bing Application Experiences team, he said, "We're going to do a few things beyond these apps, but we have nothing to announce right now."

While the Bing apps team did develop the Windows 8 Maps app for its launch, the Map team at Bing is now apparently in charge of its future development.

The Bing apps team also represents a move by Microsoft to move beyond just web-based searches. MacDonald stated, "Users don't wake up and say, 'I want to map some keywords to some URLs.' We wanted to cover a number of intents in search. That was the gist of our idea." However, he added that using apps is just one method and that the Bing team is " ... still competing with Google in search head-on."