Microsoft's Twitter for corporations offering, OfficeTalk, may soon be released commercially if reports today are to be believed.

The software, currently in private beta stages on Microsoft's Office Labs testing site, could be released into the corporate world sometime soon. A blog post uncovered by ZDNet's Mary-Jo Foley suggests the project has hit a number of internal Microsoft milestones thanks to a new environment dubbed "the Garage" which aims to grow employees ideas into products or fully-fledged features for the software giant.

"OfficeTalk is a good example of something that started as a project in The Garage, became a funded incubation, and now is being considered by the product teams," Quinn Hawkins, Program Manager in Office Labs said. "From that original idea, OfficeTalk is now used by thousands of folks around the company every day."

The OfficeTalk software allows corporations to quickly setup an environment akin to that of a mixture between Yammer and Twitter to allow employees to communicate amongst one another on projects and questions. Since its unveiling late last year, it's been used internally at Microsoft and has been downloaded and trialled by other corporations, although at this stage it's still invite-only.

It's unclear at this stage how Microsoft would intend on offering the OfficeTalk software to corporations, and whether or not it would be bundled with, as Mary-Jo points out, Sharepoint or Dynamics CRM, or if it would be sold separately. Microsoft officials would not comment further on the news.

Other projects to come out of Office Live Labs include Ribbon Hero, a game to teach users the location of features in Office 2010's ribbon UI, Email Prioritiser, which allows you to change priorities of received emails in Outlook, Community Clips, which allows users to share "How-to" videos for Office with others and pptPlex, which turns a PowerPoint slide into a zoomable canvas. 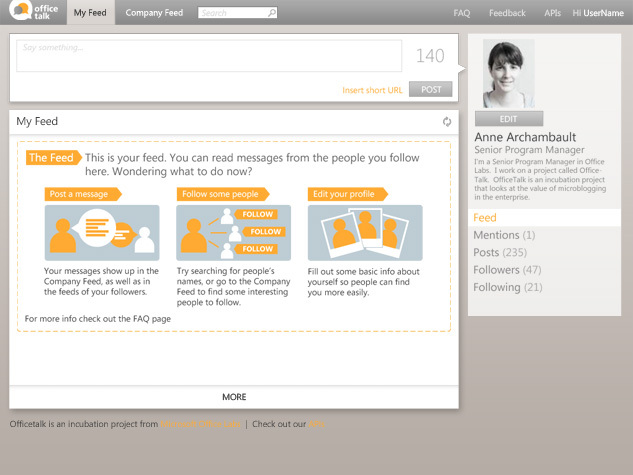