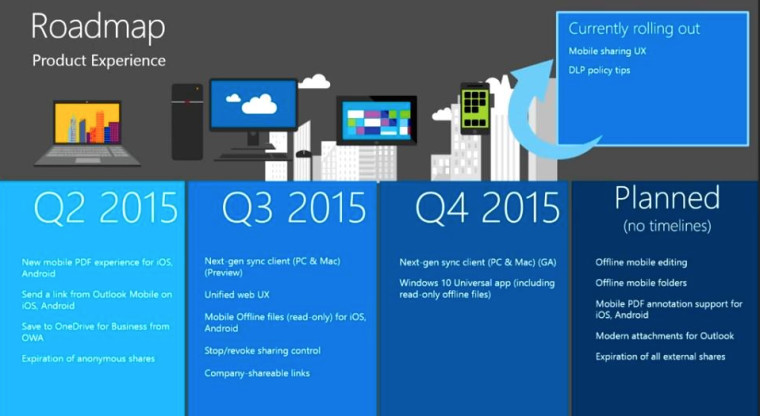 The past two weeks have been filled with Microsoft announcements thanks to the Build 2015 conference last week and Ignite conference that is happening this week in Chicago. During one of the breakout session at Ignite, the Redmond based company outlined the upcoming features to OneDrive for the remainder of 2015.

The roadmap hits all the high level features that are coming to OneDrive including updates to the UI, offline file support, a new syncing service, improved attachment support for Outlook, PDF annotation support and a Windows 10 Universal app that should arrive in Q4 of 2015.

Most of the features appear to be related to giving you greater control of your shared content and using files offline. Seeing as this is a roadmap and not a specific announcement of any particular feature, the timelines could change for when each feature will be released.

For those of you who use OneDrive, this roadmap will give you a good perspective of where the platform is headed and what features you should expect to arrive in 2015.

Thanks for the tip @winobs