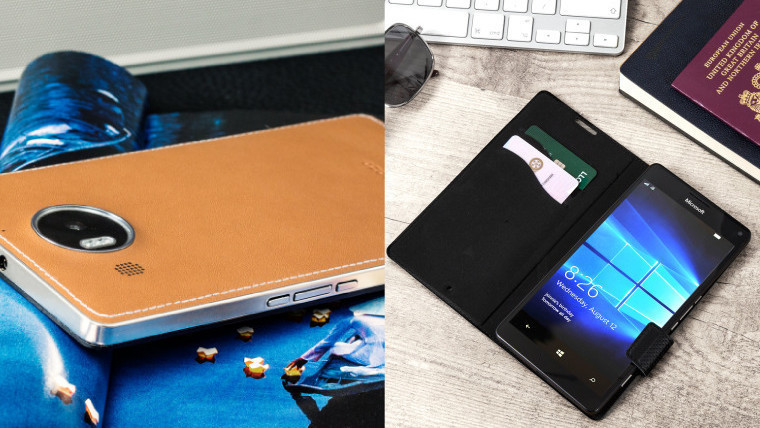 While earlier Lumia devices were offered in a dazzling array of colors, Microsoft's latest Windows 10 Mobile handsets are only available in black or white. But when the company unveiled its Lumia 950 and 950 XL flagships back in October, it also showed off some luxury covers for them, as part of its 'Designed for Microsoft Lumia' program of official accessories.

Mozo is the manufacturer of the covers that Microsoft showcased at its launch event, and it now offers a wide range of options in various colours. Now, MobileFun.co.uk is offering huge savings on many of those Mozo covers for the Lumia 950 and 950 XL, with up to 50% off.

Many of the covers available are genuine leather, and some also include wireless charging support. Along with the standard rear cover that replaces the black or white backplate that ships with the handsets, some of the covers are 'flip'-style, also covering the display.

You can see the full section of offers here. The retailer says that it is now clearing out its remain stocks of the covers, and many are now in limited supply.

Meanwhile, the price of the handsets themselves continues to fall in the UK. Microsoft slashed 17% off the Lumia 950 and Lumia 950 XL this month, reducing their prices to £319.99 and £399.99 respectively. But some retailers have cut their prices further - the 950 XL is currently available at Amazon for just £368, including a one-year Office 365 Personal subscription, and a free Display Dock.

An extra £5 discount - exclusively for our readers

Neowin readers can get an extra £5 off each of the following covers, thanks to an exclusive discount code provided to us by MobileFun.co.uk:

Simply enter the code MOZO5 when you check out, and you'll get an extra £5 off the prices shown above for each cover that you purchase.