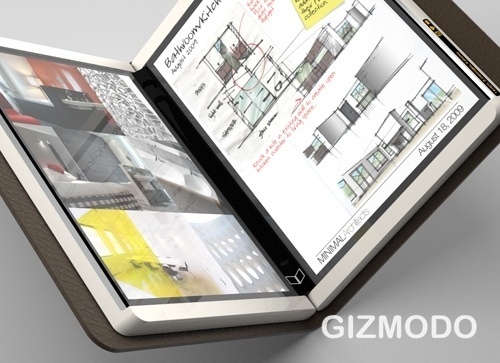 Microsoft's Courier tablet project, which would have been released with two seven inch touch screens that folded into each other like a book, never made it into production. News.com posted up the first of a two part story earlier this week that revealed more about the Courier. Now the web site has posted the second part of the feature, with even more info gleaned from chats from unnamed former and current team members at Microsoft.

While the Courier team believed in the project, the tablet didn't sync up with the plans Microsoft's Windows division, led by Steven Sinofsky, had for future versions of the operating system. In the end, the Courier team tried to show Microsoft leaders Steve Ballmer and Bill Gates that the tablet offered features that Windows could not. But Sinofsky's team won out and in hindsight some team members believe now that the Courier might have been saved if they tried to work with the Windows team instead of competing against them. One of the unnamed Courier team members is quoted as saying, "If you get Sinofsky on board from the start, you're probably going to market."

The tablet's project leader J Allard left Microsoft soon after the Courier project was officially shut down by Microsoft in April 2010. So far, he has apparently put in some money into angel investments for a couple of companies but otherwise has kept to himself. Sinofsky is still at Microsoft leading the Windows 8 team. That team hopes that its touch screen interface will find its way on many third party tablets when it launches in 2012.