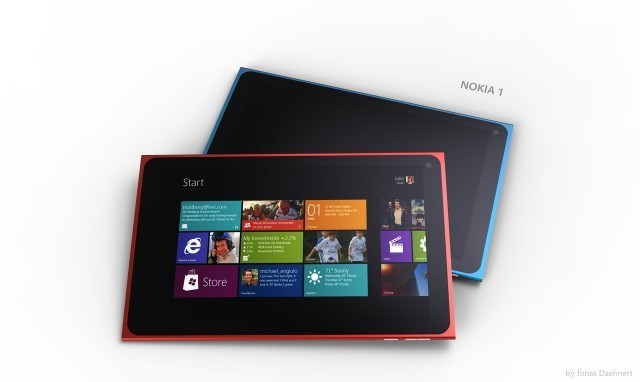 \
This mock-up, created by Jonas Daehnert, shows his concept for a Nokia tablet.

There have been tons of rumors and speculation about Nokia's plans to release a tablet. Most of those reports claim it will be using Windows RT along with Qualcomm's upcoming Snapdragon 800 processor. Other rumors claim that the tablet will get an official reveal on Sept. 26 in a New York City press event.

Today, Microsoft-News.com reports that a tipster sent some more information about the Nokia Windows RT tablet. Much of the information has been mentioned in previous reports, including that it will have a keyboard cover that will also serve as an extra battery, but there's some new tidbits as well, including the claim that the tablet will have 32GB of storage.

Today's story also claims that the tablet will place its USB ports in the back and that it will been Wireless N compatible for its WiFi along with cellular service provided by AT&T. The story says the tablet will come in a Cyan color and a microHDMI. The story mentions support for USB 3.0, which if true would make it the first Windows RT device to support the more recent USB standard.

Finally, the report says that the tablet is being manufactured by Compal. Hopefully when the end of September rolls around, Nokia will be able to confirm or deny all of these tablet reports once and for all.