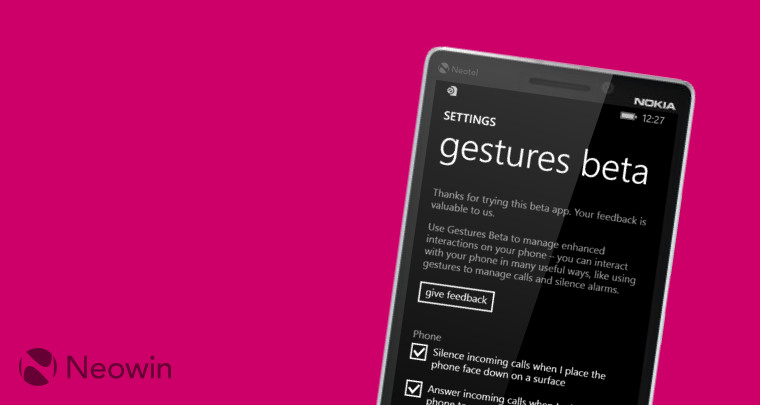 Late last year Microsoft released an exclusive app for its Lumia line of devices, called Gestures, which allows users to interact with their phone in an intuitive way. And it looks like new functionality might be just around the corner.

The Gestures app, which is still in Beta and has never been updated since release, allows users to do things like flip their phone to silence an incoming call, or toggle speaker when setting the phone on a flat surface. While this isn’t exactly cutting edge technology it’s still a nice feature to have on select Lumia devices.

However, it looks like the app might soon be upgraded with new features and more robust support for devices. According to the app’s UserVoice page, new features are now under consideration to be added to an upcoming version. There's also a strong hint that any upcoming features will directly be integrated into the OS and Windows 10 for phones is called out specifically.

Some of the new features are also some of the most up-voted and include:

As you can tell, these aren’t super exciting features and some are more useful than others. Still it’s good to see Microsoft listening to the community and continuing to improve its mobile offerings, albeit incredibly slowly.

Source: UserVoice | Thanks Arghya for the tip!