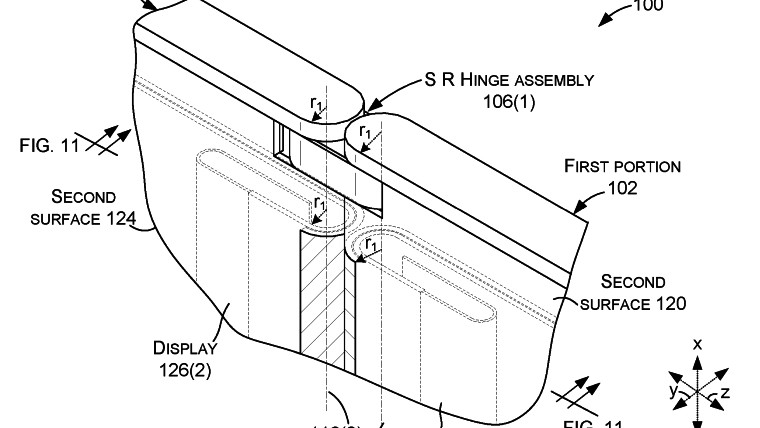 We have known through previous patent filings that Microsoft has been toying with the idea of a new foldable device - thought to be a Surface phone - with dual screens and some interesting camera tech. A new patent granted this week gives us a bit more detail on the hinges holding everything together.

The patent shows off a special "self-regulating hinge" design that shows the device set like a traditional laptop, but also laid flat, with the two screens joined rather seamlessly to work as a tablet. The hinge would also allow the device to fold backward in a tent mode with the screens facing outward, allowing it act as a nightstand clock.

The official description offers this about how the hinge works:

Keep in mind that Microsoft may not do anything with any of these patents. This particular patent was filed late last year, but just recently granted. Microsoft could still be innovating, or might have ditched the project altogether. Remember that the Surface Mini was rather far along before Microsoft officially canceled it.

As with any of Microsoft's projects, we have to rely on rumors and speculation until some sort of unveil happens, but all of these patents in conjunction with each other makes for a rather intriguing product.