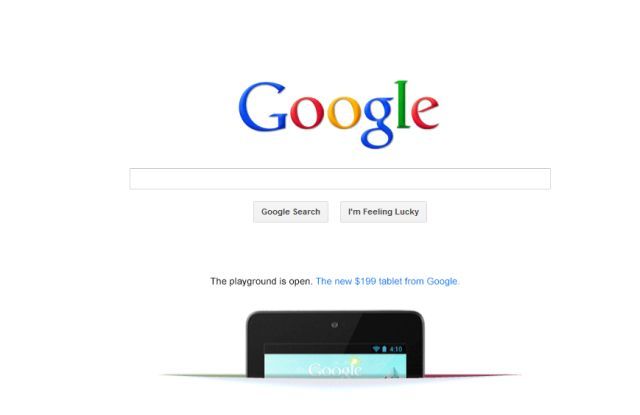 Google has used the front page of its Google.com website to celebrate some cool birthdays and anniversaries by turning its normal logo into interactive experiences. One of the more recent Google "doodles" was a working virtual Turning machine.

Today, Google has turned the front page into something a bit more commercial; while the logo remains the same, the page now displays an image where the top of the recently released Nexus 7 tablet pops up from "under" the Google.com search bar.

This isn't the first time that Google.com has been turned into a very large (and high traffic) ad banner. The page also featured an ad for the original Droid smartphone from Motorola (now a part of Google) back in 2009. It did the same with the launch of its own Nexus One smartphone in early 2010.

Google might be using its main page today to push the fact that the Nexus 7 is now available in more countries. The Google Play store has now opened up for residents of Germany, France, and Spain to purchase the 8 GB version of the tablet for 199 euros and the 16 GB version for 249 euros.