Since Google released the Nexus One, people have been ranting and raving about the amazing colors and clarity that its 3.7" AMOLED display outputs. While the Nexus One's colors do pop, the AMOLED technology used for this seemingly "superphone" is less than stellar. DisplayMate ran some tests and the results are nothing short of shocking.

Without going into too much technical jargon, the Nexus One's screen uses a PenTile pixel arrangement. This means that each pixel only contains two sub-pixels. In a traditional display, each pixel consists of three sub-pixels (red, green, and blue). The pixels on the Nexus One's AMOLED display only have a green, plus a red or blue on every other pixel. This isn't necessarily a problem, as the software can just use the red or blue from a nearby pixel, but it does put an extra strain on the software and can cause artifacts to appear on the screen.

DisplayMate points out that the above is irrelevant unless it affects the actual image quality. If a user can't tell the difference, then who cares? Unfortunately for the Nexus One, you can see a huge difference when comparing it to a standard LED display, such as the iPhone's. Here are some of DisplayMate's conclusions:

UPDATE: Gizmodo has made two updates regarding the above news stating that the problem seems to be a software issue, not a problem with the display itself. Apparently the issue exists within specific stock Android apps themselves (such as the gallery and browser). Users have noted that when using an third-party browser, the image banding issue does not exist. Hopefully, with this having been brought to the public's attention, Google will issue a software update to rectify the problem. 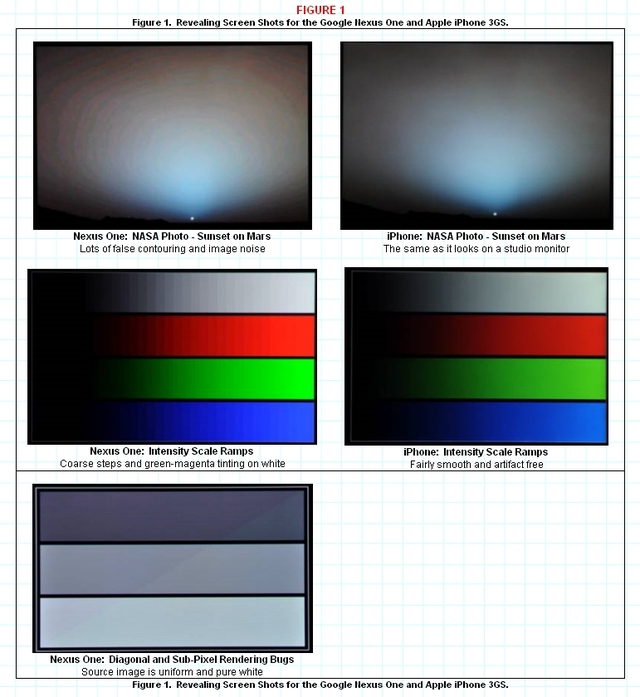